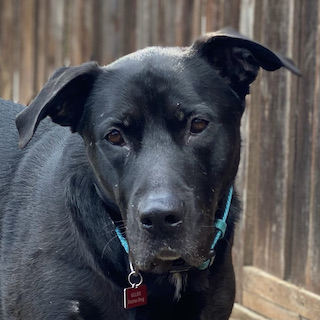 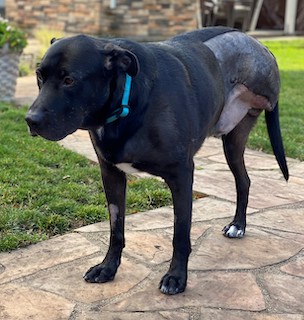 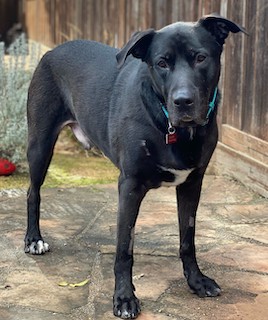 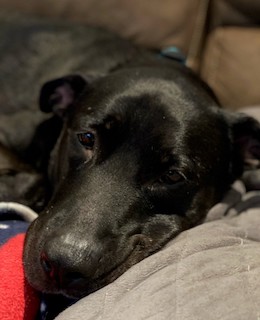 Background: Found near the I-5 highway by a San Joaquin County Sheriff in mid-October, this guy was suffering from a badly broken left hind leg. His femur bone was shattered – likely a result of being hit by a car. After extensive surgery and the installation of titanium hardware to hold his femur together, a battle with challenging bacterial infection at the site of the injury began. We pulled him from a central valley shelter hoping to nurse him through his recovery, but Charley’s life became in jeopardy due to the expanding bacterial infection that his body and antibiotics could not resolve. He was also putting very little weight on the leg even though the surgery was almost two months ago – the bone was not healing properly. Charley (given that name by the shelter) had his leg amputated a few days before Christmas – talk about a lump of coal – but at least Charley is alive.

What Charley’s foster says: Charley is 100 lbs of sweetness. This amazing boy has been through so much and still has so much love to give. He is super friendly with people and other dogs. He’s currently living with our 6-year-old female Lab and has been around a couple of other family’s pups and is always friendly. Not sure about cats, although I know he’s a squirrel chaser. He spotted one on the fence in our backyard and took off after it. Because of his post-surgery recovery he has been spending most of his time inside. He is fully housetrained. He sleeps mostly on the couch or on a dog bed because it’s unsafe for him to maneuver getting upstairs to our bedrooms, at least for the time being. Charley has been left alone in the house multiple times with no issues. The only times I’ve heard him bark are when the doorbell rings and when I’m returning home; he will bark at the door, just excited for me to walk in. Charley also feeds off the energy of our own dog so he may not even do that if he’s the only pup. He sometimes startles and gets scared of loud, abrupt noises so he may not be a fan of 4th of July fireworks. He loves his food and treats and will sit, stay, and wait for me to say “ok” to eat it. He definitely knows “sit” and “stay” and comes when you call him. Charley loves to have his ears scratched. Sometimes he snores as loud as my husband. He is a cuddler (or a nuzzler as I call him). He loves to nuzzle in right next to you for pets and sometimes tries to be a 100-lb lap dog. He has been recovering amazingly from his surgery and has adjusted so well. I think if dogs could talk he would be saying that he is so thankful that he was saved and that he is ultimately much happier on 3 legs. Whoever adopts sweet Charley is hitting the jackpot!

What Charley’s Rescue Rep says: What a wonderful spirit and attitude for so much that he has gone through. He was not using that injured leg much at all when he first joined our program and is getting around exceptionally well now that the leg is completely gone. We except him to recover fully from the amputation surgery and live a long and fulfilling life on just three legs. He is one big dog – not really that overweight – do not know sure what he is mixed with. Charley will need some work on walking on a leash as he pulls quite hard on the leash. Would do fine in a home with or without another dog. Might be a bit too exuberant for small children or someone unsteady on their feet.

Medical: With the exception of lacking one of his back legs, Charley is in great shape. He is current on Rabies and distemper vax, heartworm negative, neutered, and microchipped.

Charley is located in: Napa.