Share This Lab:
Video: Running with the Cuda (at the shelter)

Video: Walking with the Cuda 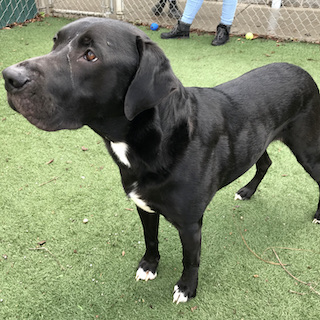 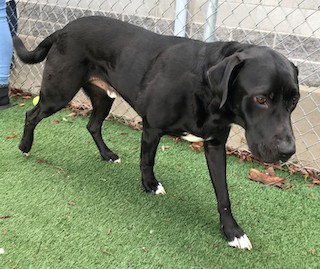 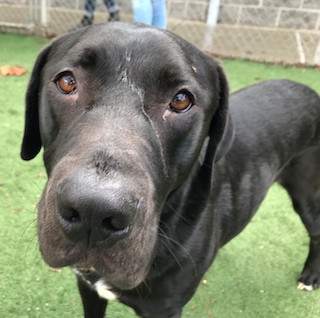 Background: Cuda was surrendered by his owner in late December to the Sacramento SPCA. His former owner stated that they could not afford the vet and that Cuda was having seizures. They provided no information on the frequency, duration, or intensity of the seizures. His former owners did say that Cuda lived with children (7-yr-old and 1-yr-old) and with another dog. Cuda was quite anxious at the shelter and they put him on a daily regimen of trazadone to reduce his anxieties. We have since discontinued giving him the trazadone. Cuda’s former owners also reported that he was a bit of an escape artist.

What Cuda’s foster says: Since his arrival almost three weeks ago, Cuda has gotten comfortable in our home. While he is still anxious, his tail is just starting to wag in happiness a little. He is now sleeping in his crate, but likes to spend his time outside in our backyard. His favorite spot inside is on the huge bean bag, which he generously shares with my son. He is not chewing anything, not really interested in toys, balls, playing in any ways. After few days of pulling and luring him to the backyard and walks, he is now enjoying his time in the safety of the backyard. He is fine alone there hanging out for a little while, as long as he sees us inside. He enjoys his running in the backyard, from gate to gate around the house, not sparing the raised flower beds. Cuda does not appear comfortable with leash walks around our neighborhood about walks outside, especially on the streets; he seems to be afraid of crossing the road; stares at every passing car. He is calmer on trails. No more accidents in the house after a few in his first days with us. He has jumped our on couch a few times but readily came off when prompted. He also understands “out” when he goes into a room he is not allowed. He is supposed to know some commands per his surrendering owner, but not so eager to obey now. Cuda is curious, but not engaging in play. Kind of an introvert dog. Hoping he will continue to come out of his shell. Cuda is doing fine with our own children.

What Cuda’s Rescue Rep says: Cuda is still coming out of his funk after his shelter experience. He can be a little nervous with someone touching him. He is a bit of an aloof dog. Cuda will need time and space to settle in to his forever home. He does love running outside, so a big backyard that is securely fenced would be great. He is anxious (perhaps unsafe?) walking on the streets -- will need some ongoing care and guidance to increase his comfort with this. Would probably be fine with another dog in the home. No idea how he is with cats. Probably not ideal for a home with small children.

Medical: Cuda is current on vaccinations, heartworm negative, microchipped, and neutered. Cuda’s original owner reported that Cuda suffered from seizures, but the shelter did not report any seizures during the five weeks he was at the shelter. He has had one seizure at his foster home and we have put him on an anti-seizure regimen of potassium bromide.

Cuda is located in: Cotati.