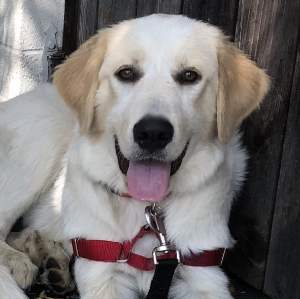 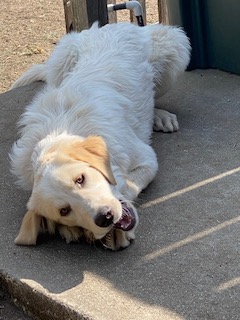 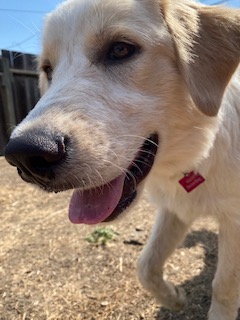 Background: Darwin and another dog, who we think is his brother, were purchased as guard dogs for a 10-acre ranch. They were left unattended to guard the property but instead would slip through the fence and roam the neighborhood. On one of their escapades, they made it across the street to a neighbor's home, their guardian angel, where she took them in and called the owner (who does not reside on the property). He said he would come to get them and didn't come for four days. When he did arrive, he collected the dogs and returned them back to the property, only for them to continue to slip through the fence and roam the country roads. Each time, thankfully, the same neighbor was able to retrieve them and the same cycle continued where the owner would take them back to the property and they would escape again. Prior to surrendering them, he tried tethering them which was short-lived because the neighbor told him it wasn't legal to keep them like that. She finally was able to convince him to give the dogs up, at which point she contacted Lab Rescue. These boys visited the neighbor's home several times, paying no attention to her free-roaming chickens, hissing cats, and two yapping terriers; each time, they were just so happy to see her.

What Darwin's Foster Says: Darwin is a 55 lb. neutered male, slightly smaller and lighter than his big brother, Gumball. He appears to be a Lab/Great Pyrenees mix and has a long white coat with light caramel coloring on ears and back. To keep looking his best, he will require weekly brushing and puppy baths; he found these new activities a little scary at first. He has the telltale Pyrenees double dew claws on his hind legs. The vet said he is a “good weight” now and likely to grow to 80-100 lbs. Darwin is up to date on vaccines, microchipped, had recent flea prevention, and deworming treatment. As a young pup, Darwin missed out on proper socializing as he only had Gumball for company prior to being rescued. He appears to love rough and tumble play with his brother, but sadly there are signs they wouldn’t make good roommates as they grow older and stronger. Darwin needs to be allowed to let his own personality flourish. Darwin does not chase cats or chickens, however, squirrels seem to fascinate him. Darwin likes people and happily greets strangers when they inevitably gush about how cute he is, accepting head pats and obliging them with puppy kisses. Sometimes he shows his excitement by jumping on people but will back off when told to do so. Darwin loves to chase the squeaky ball, but doesn’t get the concept of “fetch” just yet. Perhaps this is because he is used to Gumball bossing him around. He’s generally very good about letting you know when he needs something such as food, water, outside, etc. We found that having the fan blow on him is extremely comforting for naps and at bedtimes. Darwin is not yet house trained, but has been showing great progress with crate training and was able to achieve “sit," “stand," and "turn around" in an initial session with a professional trainer. Darwin is curious and energetic on walks. He won’t pull on a leash, however, he is on constant lookout for some tasty morsels of trash he may find on the ground. When he found something deliciously gross under a bush, he allowed his foster to sweep the mystery object of his mouth with no issue. Darwin is a delight to foster. With consistent encouragement and a little patience, he seems likely to outgrow any anxiety brought about because of his life circumstances.

What Darwin's Rescue Rep says: 55 pounds and still growing. While we don't know Darwin's breed, he appears to be more of a Golden Retriever/Great Pyrenees mix. We didn't hesitate to help Darwin (and Gumball) as they were in need of urgent rescue and upon going out to meet them, we were greeted with wagging tails and happy faces, so glad to be set free and welcoming the attention of people (certainly not guard dogs). Darwin's age has been estimated at 6-months by one of our vets. Darwin will require a home where someone is home much of the time to raise him. For anyone applying who is only working from home, temporarily, due to COVID-19, that wouldn't be a good fit as I'm looking for a permanent arrangement, e.g. a person who works from home, stay-at-home parent... Darwin is the less confident of the two dogs and can be anxious at times, and from his foster, this means "being more vocal when he needs something: hungry, potty, too hot, can't get his toy and needs extra attention at bedtime." Another nice, easy-going, and playful canine sibling to help build up his confidence would be nice, but not an overly confident or dominant dog. The trainer that met with both Darwin and Gumball is a fan of opposite sex dogs in a 2 dog-household but said it would really depend on the dog. Having a large yard where Darwin can romp and play, in addition to daily walks would benefit him. It would be ideal to find a family that would be open to having Darwin and Gumball get together on occasion. Families with large dog-experience are desired.

Medical: Darwin is up-to-date on Rabies/Distemper/Parvo/Lepto, is microchipped, heartworm tested, and neutered.