Share This Lab:
Video: Gilly running in the play yard

Video: Gilly and a stick

Video: Gilly in yard with Kea 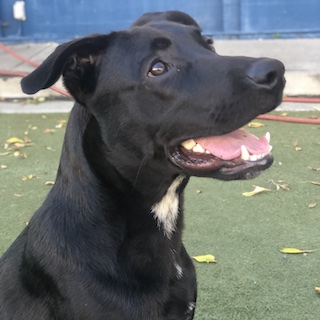 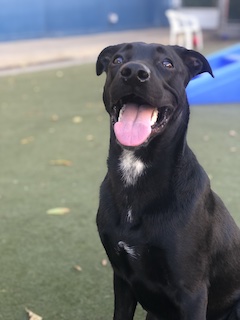 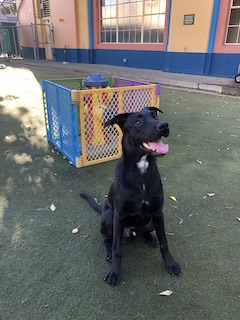 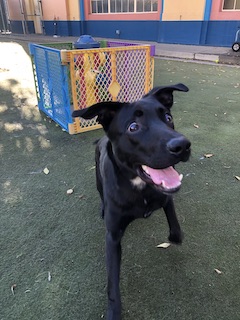 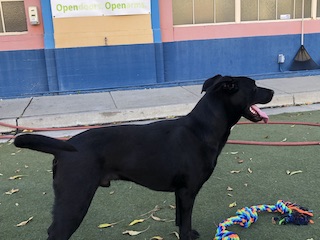 Background: This little cutie was abandoned in San Francisco - tied out to a pole next to a bag of food, the poor baby. He's bouncing back from that devastating incident and rapidly settling into his foster home, where he’s learning some basic commands and playing with his adult foster siblings. Gilly is a bright eyed and bushy-tailed young dog who is ready for his next big move to a forever family!

What Gilly’s foster says: Gilly is housetrained and sleeps nicely in his crate at night (after a few protests). He likes to play ball, and chew on sticks, Nyla bones and anything else that catches his interest. He loves to shred and wildly shake his rope toy.

One-on-one with me or with other people I've met, he is enthusiastic, friendly, likes to follow me around the yard while I'm doing watering or gardening. He still occasionally fixates on a stranger, say walking on the other side of the street or in the distance, and starts woofing at them, but at yesterday's Baylands walk he met many people up close and seemed to like them once introduced. He’s friendly and jumped up to say hi to several people in my walking group today.

He gives an occasional whine or woof to passing dogs and a bit of a wander towards them but not a strong lunge or jump. We did a gradual introduction to my friend’s dogs and Gilly was fine walking side by side with them on the trail.

Barks when he hears human voices and car doors opening in the front of the house, or when the neighbor is hanging up his laundry on the fence. Stops after barking and waits/listens for more. He barks when people come into the house but is friendly to them after getting to know them.

We are working on his door etiquette, it is much better than a week ago, and he now waits for the OK to come out of his crate in the car. But he is still an opportunist on occasion and is very interested whenever that front door opens, so prospective owners need to be on their guard.

He pulls strongly on leash though this is greatly reduced walking with a correction collar. At times he likes to grab the leash fiercely and can get quite worked up, so he will need some work on his leash skills.

I have not yet left him alone in the house unsupervised (he’s not ready for that anyway, he’s still a puppy!). He whines when I put him in the crate as I prepare to take my other dogs out for a walk, but he is quiet upon my return.

What Gilly’s Rescue Rep says: Gilly is around 8 months old. He is wildly sweet and affiliative, clever, and passed his dog/dog eval at the shelter nicely. Gilly doesn't resource guard and is non-reactive on walks, though he may get frustrated if not allowed to meet. He doesn’t know many commands though he is starting to understand sit and wait and seems to have some understanding of leave it. He is working on learning to settle. He has way too much energy currently to stay still long for cuddling, and his focus is all over the place - he’s very much a typical adolescent.

His crate is a good place for him to hang out safely while his human cannot have eyes on him; he’s still a pup and likes to chew both dog toys and other things! He whines initially in his crate, whether waiting for his breakfast or going to bed, but he settles down quickly.

Gilly’s play style with the other dogs in his foster home is fairly rowdy and assertive (paws on shoulders, body checks) and he can be a pesky youngster who keeps on coming back even after another dog tells him no. We’re thinking he might do best as an only dog in the home, or with an experienced multi-dog owner willing to manage interactions with a compatible dog. Given how much Gilly likes to grab and shake his toys (and even his bed), he’s probably not a good fit for a home with a cat.

Gilly is a young high energy dog who needs lots of regular physical exercise (a tired dog is a good dog!). He’d make a great companion for someone looking for a running or hiking companion. Gilly has the makings of a wonderful dog for an active owner willing to spend time helping him learn training basics. Given his size and energy level, and that Gilly can be jumpy, he may not be the best for a home with small children. We’d like a home that has some prior experience with large puppies and where someone is home for a good portion of the day.

Medical Information: Gilly is up to date on vaccinations, microchipped, and neutered. We plan to get Gilly a heartworm test.

Gilly is located in: Santa Clara