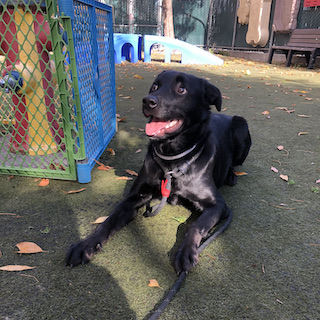 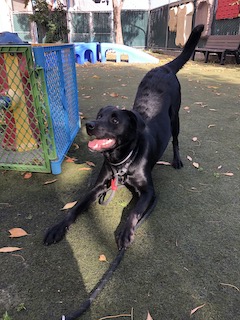 Background: Homer is an approximate 10-month old Lab mix (maybe Border Collie)? Homer's going to require a lot of time and patience and someone to work with him through his teenage transition (which can be unruly and obnoxious with moments of calm). He's certainly going to test limits and will need someone patient to let him settle in and decompress. A home that will have the capacity to gate Homer off and give him some "chill out" time when he gets too worked up, a calm and quieter home, not to say Homer doesn't want to play but that seems to be a trigger to where he can't contain his energy and gets very mouthy, nippy, and jumpy.

Homer has been shuffled around a lot. He was initially surrendered by an owner who got him off of Craigslist. That person couldn't handle Homer's energy and puppy behavior surrendering him to the shelter after two-weeks. SFACC sent him to a volunteer/trainer where he stayed for four nights; her assessment is included below*, and she really liked him. He was adopted out of SFACC and returned after four days as the couple said they couldn't handle him. The shelter thinks they may have done too much too fast, not allowing him to decompress. He was reported to be destructive.

With more than 10 years of home fostering experience, I felt Homer was truly exhausted. Like an overly tired young child, he could over-stimulate easily with zooming around and softly mouth my forearms if we played too long. He has a fun Lab play growl when tugging toys which I found rather charming, although in less experienced care, may be misinterpreted.

Almost immediately, my personal foster prescription for this repeatedly displaced lad was real rest. He has so much sleep to catch up with - which possibly may take months. Because we have a dog in our home that is not keen to be with others, Homer stayed in our unoccupied in-law apartment/home office downstairs that is decked out with large crates and extra large ortho cushy beds strewn about. The first night with us, Homer settled-in alone downstairs quite quickly. He pawed at the door for about 2-3 minutes then lied down. It took several nights for him to begin to sleep deeply. I suspect, being in yet another home, the new environmental sounds and smells kept him anxious and alert.

We mostly spent our outdoor time together in our tiny postage-stamp-sized backyard working on "sit" and jumping through a hula hoop. We limited ourselves to a handful of very short neighborhood walks. The loud, beeping, banging recycling garbage trucks frightened him, causing him to flee and pull strongly in the opposite direction with his worried head down, tailed tightly tucked and ears flattened over his head.

I would let him get some real rest for several months before trying to stimulate him with hours of exercise, play or neighborhood walks. I think there is a lovely dog underneath all the fearful anxiety and occasional high arousal when overstimulated. I would hit the "reset button" and introduce the world to him in short gradual increments. He has some catching up to do, but he will need to go at a careful slow pace. He's aching to be loved, seems to trust quite quickly and in my opinion, needs someone who understands his adolescent body and immature view of the world will take some special patience.

Homer is very sweet and smart - is going to be a great dog.

Very much a teen/toddler - can go from tired to overtired/over-stimulated if not careful.

Homer has been very responsive to some suggestions from a trainer who works with GGLRR. He was getting pretty excited by regular walks, and she said that some dogs get too stimulated by just walking with no brain engagement. We followed her advice and now walk him on a short lead, asking him to sit often next to us and reward with treats. Having to do a bit of "work" on walks has made them enjoyable for him without being overstimulated, and when we get back, he is now ready to rest versus run around.

Her other suggestion that is very effective with any undesirable behavior: Homer sometimes gets quite mouthy (usually when overtired or overstimulated) and we now make a hissing sound as a warning and if he does not stop, we make a loud noise (homemade noisemakers can be handy- like a can with rocks as a loud rattle) He does not like the loud noise and in the short amount of time he has been here, many of his puppy behaviors are well regulated with this technique.

A cozy cuddle buddy at nap time if you sit on the floor with him.

In general, Homer loves being outside more than inside. The backyard is a great play area. Sort of plays fetch (getting better) and loves tug of war.

Good on a leash - does not pull, shows interest in other walkers and dogs, but does not chase (except squirrels, and who can blame him, they’re so annoying, right?)

Doesn’t do marking on walks yet. Sniffs a lot, but not stopping to pee all the time - I’m sure that will come.

So far, good meeting other humans and other dogs (there hasn’t been much but he’s been great about approaching calmly, without aggression, interested and friendly. He has also been willing to walk on by if the other dog owner is not interested.)

Excellent human meal behavior. Does not beg, lays down, and pays little attention to the food. Also will pay attention when there is an activity in the kitchen but not beg

Sleeps in a crate at night (door open). Is house trained.Very little barking.

Sleeps nicely behind my office chair during the days.

Can sit, lay down, shake, high five. Working on come and stay. (as long as you have a treat in hand. Not as much on demand.)

Working on recall-come and recognizing his name. Again, is pretty good at it when treats in hand and no distractions.

Will now show his belly when relaxed and enjoys belly rubs

Mouthy - he’s very soft-mouthed, but when things get a bit exciting, he will try to mouth hands and feet, especially mine. We can often distract with a toy but he may have spent a fair amount of time roughhousing this way, and thinks it’s pretty fun and can’t stop easily.

He will also get mouthy when one is reaching for his head or collar. In general, he does not like head pats.

He still wants to be on the couch- again, think it was allowed for him in the past. So far, he hasn’t tried to get on a bed.

He will leap at and try to grab any sort of dangling fabric - folding laundry or lifting a coat,etc. It’s all a pull toy. He's a puppy after all.

Has picked up shoes, pillows, and begun to chew. Distractible and no outright destruction accomplished.

Jumping up on people - quickly getting much better at not doing this.

Like any puppy - can't let them get bored. He is so smart and a quick study. He could be a great frisbee or agility course dog. But this also means he needs challenges to stay busy/learning.

One last tidbit - Homer is terrified of the trash trucks. We will be walking on trash morning AFTER the trucks have left the neighborhood.

What Lab Rescue Says: Homer's a nice dog with some challenging behaviors and is going to require a lot of time and patience for someone to work with and stick it out with him.

A family with dog-experience and one that will be able to invest in the proper training to keep Homer on the path to success will be ideal.

He probably wouldn't do well with small children, as he is still jumping, mouthing, and nipping. A quieter adult household would be better suited.

He hasn't been around cats.

Homer is neutered, UTD on vaccines, and will be heartworm tested in January.