Share This Lab:
Video: Leash Walk with Indigo and Bailey 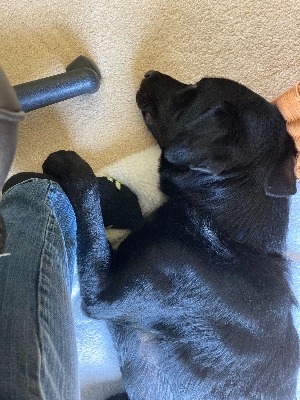 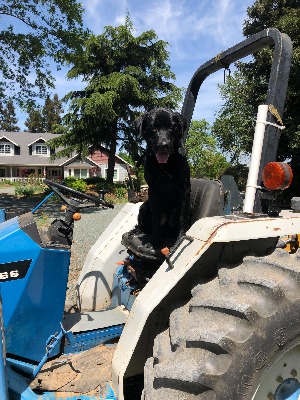 Background: Indigo is back in our program after not making the cut for the Dogs4Diabetics (D4D) training program. Prior to going into D4D, Indigo was found as a stray and adopted out from a Sacramento shelter. After a few months, he was surrendered by that family as he was very rough with a puppy they were raising for Guide Dogs. His previous family lived on 5 unfenced acres and Indigo did well in the company of his people. As long as they were close, he would walk the property with them, play fetch, enjoyed swimming in the pool, and could entertain himself by playing soccer with a jolly ball. When they had to do work on the property where Indigo couldn't be by their side, they put him in a large kennel but he would scale the fence to be with them. He wasn't left alone very much and when he was (four hours max), he was in the house. They reported he was strong on a leash, pulled a lot, and jumped on people when he got excited but responded well to positive reinforcement and described his personality as smart and loving with people. He played/socialized well with other large dogs on a weekly basis.

After approximately seven months with Dogs 4 Diabetics, here's their assessment of Indigo:

Dogs4Diabetics met Indigo and thought he might make a good diabetic alert dog. Their fosters spent seven months socializing Indigo, most of which occurred in two homes.

Indigo needs a strong leader and someone home with him to whom he can be a velcro dog.

The first home he was in for 5 months with a handler who used primarily positive reinforcement.

His second home was an evaluation home to determine if he was ready to start formal training, he was there for 2 months. There he received balanced training with positive and negative reinforcements. It was in this home we saw the greatest improvements, but his behavior remains far below what is needed to be an appropriate service dog.

Indigo's most recent foster while with D4D is now fostering him for Lab Rescue; their home is comprised of two parents, three children ages 14 to 22, and no other animals.

Just for fun one of his fosters paid to have a DNA test done on Indigo and here are the results.

What the D4D Foster Says:

Indigo is a fun, beautiful, super-smart dog who is a joy to have around the house. Indigo thrives in a stable home environment with a strong leader who he can trust to keep him safe. Indigo loves all his family members and wants to be part of a pack, but he is a Velcro dog who attaches most strongly to his leader – me – and who follows his leader around the house. Indigo will spend hours under my desk lying in the sun and holding my foot while I work. Indigo doesn’t need constant attention, but he is a young, healthy dog, so he does want to play and take a walk around the backyard several times a day. He likes having people around, but he doesn’t make a fuss about being put in his kennel for a few hours, as long as he’s given a Kong stuffed with treats. He’s fine with being in his kennel overnight and will remain quiet until a reasonable time in the morning. Indigo loves being at home! Home is the place where Indigo feels the most secure and is at his best – he’s relaxed and happy. His previous fosters did a great job teaching Indigo house manners. He doesn’t play with anything that doesn’t belong to him. He doesn’t jump on furniture unless you let him. In our home, the only furniture where Indigo is permitted is the end of my son’s bed. Indigo stays there all night, and in the morning he walks from room to room to greet each family member with a kiss. He is very clean and perfectly housebroken. Indigo’s biggest house flaw is that he likes to steal bread, probably because of his history as a stray. When we first left Indigo home alone in his kennel, we discovered that he knew how to open the latches to get out and steal bread (he’s a highly intelligent problem-solver). We now use carabiners to secure his kennel, and they work great because they require thumbs to open (sorry, Indigo, you can’t solve that problem). Indigo’s second house flaw is that he likes to greet his visitors at the front door by jumping up to give them a kiss. We are actively training against this habit and seeing good progress. For Indigo to keep blossoming, all training is done in a manner that keeps Indigo feeling safe and preserves his trust in his leader.

Indigo also loves being in his backyard! He loves to walk the perimeter of his kingdom and to help me break down the limbs of a fallen tree. Indigo is healthy and agile and can easily scale the 6-foot fence in our backyard, but generally he’s not interested in doing so. I’ve only seen him do it when he was trying to get to a person he loved on the other side. Still, Indigo shouldn’t be left alone in the backyard without a higher fence. He will sometimes bark at the dog next store, but now that he’s settled in and knows that dog, he’s usually not interested, and he will stop quickly if asked.

Indigo loves to play tug, especially with squeaky toys. He also loves to fetch a ball and is great at returning it. When he returns the ball, he sometimes alternates between people to give others a chance to get in on the fun. He is so engaged in fetch that we have played it off-leash in an open park with no problems. I wouldn’t advise doing so unless you’re sure no other dogs will show up. Still, Indigo should be fine attending a kid’s soccer game in a park if he’s on leash.

Indigo doesn’t often bark in our house now that he’s settled in. When he does bark, it’s a Lassie-type thing where he’s trying to communicate something to me, like he needs to go outside to relieve, or he’s stuck on the wrong side of a door, or he’s angry that I won’t do what he wants and is throwing a little temper tantrum. It’s easy to get him to stop, and if he’s mad at me, he will easily step back in line if I reassert my authority with a calm but firm sit/down command. Indigo sometimes vocalizes like a Husky or Malamute, which is really cute. Indigo doesn’t usually bark when the doorbell rings, he just runs to see who is there to visit him.

Unless he is walking with a dog friend, Indigo remains anxious on public walks. He will bark and pull hard when he sees other dogs. The prong collar takes care of much of the pulling problem, but not the anxiety. However, Indigo can be quite different if he’s walking with a dog buddy. Recently, Indigo went on a walk with a friendly dog, and it went great! It took Indigo a few minutes to settle down with his new friend, but once he did, he was much calmer and more secure walking around the neighborhood. He stopped pulling. When we walked past a house with a dog standing outside in the front yard, Indigo didn’t even make a move towards him. Indigo had his little dog pack, and that was all he wanted. I think Indigo would love to have an adult dog friend to walk with him around the neighborhood. If that’s not in the cards, Indigo would be just as happy being at home or in his backyard with his people.

Indigo is a smart and affectionate dog that will require a strong and confident leader. In speaking with the D4D program manager, she feels Indigo would do best being at home with his family, rather than a dog that can go out and about. It's too overly stimulating for Indigo and creates anxiety in him. He is much more comfortable and relaxed at home. Indigo is not a dog for an inexperienced family, looking for their first dog. In his first home back in Sacramento, he was around other large dogs and reported to do well. Just before he was turned over to our program, he did have an incident with a puppy in a D4D class; there are differing interpretations on whether it was rough play or not. In any regard, with Indigo's past behavior with a puppy when he was in Sacramento and this most recent incident, he should not be around puppies or smaller dogs. Indigo is house-trained, as well as crate-trained (for short periods); he may have some separation anxiety as he recently escaped his crate and raided the kitchen, but his foster reports he was very neat about it. We know he’s adorable but he’s not the right dog for every family situation, and we want to ensure his future adopter will set him up for success and be his forever home. I think Indigo would do well in a quieter neighborhood and even better, in more of a rural setting- a home with a large yard, similar to the environment he had in Sacramento. He had room to get adequate exercise on their enclosed property, had regular play dates with other large dogs, and he wasn't left alone very much as one of his parents was retired. Also, scaling the fence there meant getting out of an enclosure on their property, whereas scaling a fence that goes into another neighbor's yard or onto a street is of concern. It would be ideal for Indigo's family to get him enrolled in training classes to help with leash skills, proper doggie socialization, and general obedience training. Indigo would probably do well living with another larger dog with equal energy. Because of his size and excitability, a home with small children wouldn't be suitable.

Medical: Indigo is UTD on vaccines,heartworm negative, and neutered.

Indigo is located in: Pleasant Hill.