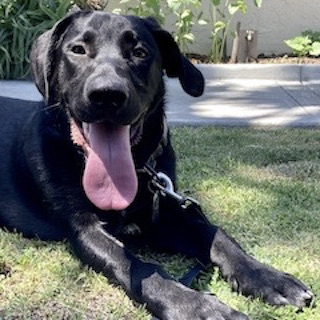 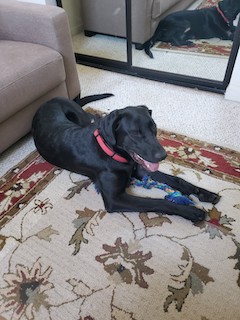 Background: Lucci was adopted from Craigslist and with his new family for only two months before being surrendered to rescue as his owners had to urgently relocate and were unable to take Lucci with them.

Lucci's been with Lab Rescue since August and recently completed a 10-day board and train program to help him with leash skills, separation anxiety, crate-training, basic obedience, and impulse control.

He's been in a foster home since mid-September and here's

What Lucci's Foster says: Lucci is a loving and affectionate dog, and he loves affection. He can be hard to discipline at times because of his sweet and innocent look.

Lucci is a very high-energy dog (Exercise, Exercise, Exercise). I’m able to take him on bike rides. He runs alongside the bike with ease. We are up to 3 miles. I have him on a slip collar and leash combo (provided by his trainer) and he will get agitated from time to time with it being around his snout.

You must be firm to control him when he gets unruly. He does bark at other dogs, so we are working on putting him in a calm and submissive state before approaching the other dog. He is a work in progress. Lucci is very calm when we approach goats, horses, and llamas on our hikes.

We continue to reinforce Lucci to sit, stay, don’t touch and 10-second eye contact when feeding him. We make him sit when exiting and enter the front and back doors. We will not release him until he is in a calm state, and we require eye contact for 10 seconds.

Lucci responds very well to the commands (Sit, Stay, Down, and Don’t Touch).

When Lucci must go potty, he gets very restless and starts whining. When he’s in a fenced area of the house or in his crate he will start pawing at the gate.

Lucci loves to play fetch. He sometimes doesn’t always drop the ball at your feet; even though I give him the Don’t Touch command, he wants to play tug a war so I will ignore him until he drops the ball.

Lucci is comfortable going into his crate. Sometimes we toss a treat into the crate to get him in it. We cover the crate with a blanket. He sleeps through the night and there haven’t been any incidents. This is also effective when you want some quiet time or when he misbehaves. We allow no water 2 hours before bedtime.

We have a 5-year-old yellow lab and that Lucci wants to play with. She doesn't always want to, and if she growls at him, Lucci eventually gets the hint and leaves her alone.

What Lucci's Rescue Rep says: Lucci is between 9 and 16 months old and is trying to find a place he can call home. He is a young, friendly, energetic, playful, and strong dog that needs a home with a large yard and a family that will continue to work with and train him, following the same training skills/techniques taught in board and train, including crate training and boundaries. Lucci will thrive with an active family with big dog experience. He has the potential to make an excellent running partner; he's already progressed in running alongside on bike rides with his foster.

Lucci would do well with another dog of equal size and compatibility.

Lucci is a handsome boy and needs an Alpha in his life!

Lucci will require lots of exercise, strong leadership, and will benefit from daily vigorous exercise. A good dog is a tired dog! These words certainly apply to Lucci. He responds so much better after exercise.

Ideal for an active couple or individual that can provide firm and consistent direction. Families with young children need not apply. Lucci showed discomfort by barking at the 6-year-old in one of his foster homes; he did fine with the older child in the home (13 years).

Lucci is located in: Danville.