Share This Lab:
Video: Phineas romping in the backyard

Video: Phineas walking around in the backyard 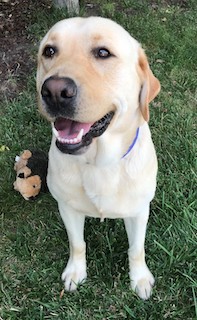 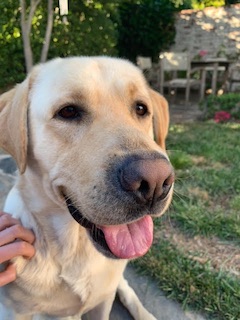 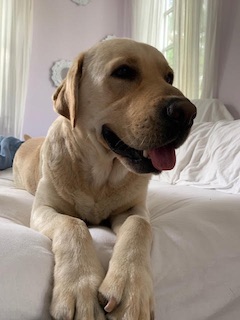 Background: Adopted from a Nevada rescue organization just a few weeks ago, Phineas’ family reluctantly surrendered him to Lab Rescue after he showed an inappropriate behavior of attacking select young (female) dogs.

What Phineas former owner says: We spent the first few days [after we adopted him] around our house and yard. We have a 12-year-old golden retriever, and Phineas was very respectful around her. She is a slow eater, and Phineas would try to grab some of her food, but when we said "No" or "Leave it" he backed off. He was curious about the house and yard, but seemed to settle in. We noticed he did not like to be left alone – he’d always seek a room with people in it. He is a prince at home. He likes being around us. He likes being pet, scratched and brushed. He is not overly sensitive about ears or tail. He fetches, and has a "soft mouth" (you can take the ball out of his mouth easily--no wrestling or biting). He is food motivated, but we've seen no evidence of food guarding. He sleeps soundly through the night (though he snores). He does not like being confined in a cage/crate. He likes squeak toys. We have walked him at least twice a day. He needs leash training--tends to pull, especially when he sees another dog. He's quite strong. When we first got Phineas we took him on a walk with a friend who has a 6-month-old Labradoodle puppy. Phineas went after the puppy immediately. The puppy was submissive, but Phineas had his mouth around her throat. We pulled him off, the puppy was uninjured, and ended the walk. A few days ago we took him to a dog park. We kept him on a leash while introducing him to the three other dogs who were there. He growled a bit, but not aggressive. When we let him off, he ran and played without incident. Then another female dog came to the park. He immediately went after her. She was submissive, but he again went for the throat. We separated them, and the other dog was not injured. But we decided we could not keep Phineas given this unacceptable behavior.

What Phineas’ Rescue Rep says: This is one great dog, but! Phineas’ former family may have given him too much freedom without boundaries and/or unearned affection too soon and he took full advantage of it. He is a wonderful, friendly dog with all humans but quite over-the-top anxious when it comes to other dogs. We have placed Phineas with a professional dog trainer to resolve his inappropriate behavior with other dogs. Phineas’ adopter will be expected to embrace and employ the tools and techniques used by the trainer. Phineas’ adopter will have to be strong-willed, big-dog-savvy, and committed to his continued rehabilitation. Pushovers need not apply.

What Phineas’ trainer says: Phineas seems to be targeting young/submissive dogs, which is a common occurrence by young dogs who are just starting to try and be bullies, see if they can throw their weight around and get their way with other dogs. It's rude and can become dangerous if not dealt with, but it's not there yet with Phineas. He is responding great to the training. I have not seen any redirected or handler aggression. The dogs I have introduced him to I don’t let him hang around long enough to start mouthing; I call him back right away with a longline on. He is very odd with his dog aggression; he is slow moving and not vocal, is not respectful of other dog cues to stop; needs human intervention. Right now I have him with longline around other dogs; also started basket muzzle conditioning for safe introductions as well. I haven’t seen anything that is a danger to people. I think he is a great dog for an experienced owner comfortable with a dominant male dog.

Phineas is located in: Watsonville.