Video: Romping outside with The Ray

Video: Ray (who is blind) doing the leash-walk 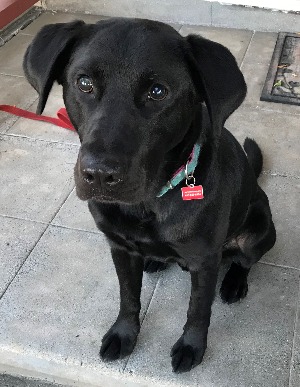 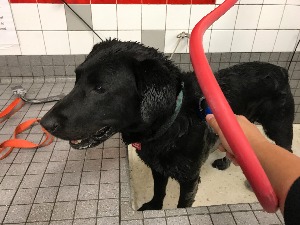 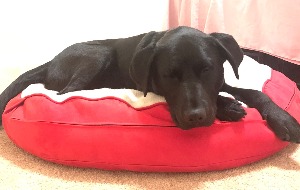 Background: Originally found as a stray up in Humboldt Count in mid-2020 [Who the heck “loses” a blind dog? Give me a break!] We named him “Ray”. We recently adopted Ray to a family, but Ray’s has exhibited some inappropriate behavior and they need us to find him a new home. Ray has lunged at and nipped some of the adult kids and a neighbor (who surprised Ray by coming unannounced into the family’s backyard. Ray’s current caretakers are having Ray wear a basket muzzle when there are people around that Ray may be uncomfortable or unfamiliar with. So we have placed Ray back up for adoption… hoping to find that very special forever home for him. Ray has bounced around quite a bit in recently months between fosters and adopters -- no doubt this constant change is contributing to Ray’s inappropriate behavior.

What Ray's current adopters say: Ray can be a very sweet and loving dog. He follows commands quite well and seems eager to please. He follows Mike everywhere and can't seem to be close enough to Mike. It's really sweet! Ray gets along well with Rocco (our existing dog) but they don't really play together. I will say, Ray prefers Mike over Rocco. We feed them apart and give them treats away from each other so there have been no issues around food. Right now he gets up about 3:30 or 4:00 AM because that was Mike's schedule for so many years. They come out to the couch while Mike watches TV and then he feeds both dogs about 5 AM. Ray is not allowed on the couch but Rocco is. After that there's usually a nap until about 7:30 AM. Ray is allowed access to the entire house and yard at his pleasure. He has learned to use the doggy door. There are many times we will find him outside, just sitting on the porch enjoying the morning sun or the cool night air. Ray loves his walks. First walk is about 9 AM. We walk twice a day for about 2-4 miles each time. Yes, we can wear him out. If he senses another dog he will bark and lunge toward the dog. We started having him sit until the other dog passed us, but then we realized that we were alerting him to another dog when maybe he wouldn't have sensed it. So now we just keep walking and tell him to “leave it” -- It's a work in progress. Evening walk is about 7:00 PM. We head to bed by about 8:30 and Ray usually goes right to sleep. His bed is on the floor on Mike's side of the bed. Ray allows most of us to pet him on the head and give him kisses. He loves belly rubs and ear rubs. He loves to sit at your feet if you're eating a meal or just relaxing on the couch. He is pretty good about finding his way around the house and the yard, but of course he still bumps into things. We use the command “slow” if we see he's about to run into a wall for instance. We have tethered Ray when we were bringing things into the backyard and needed to leave the gate open for a while. At first he didn't like it, but has grown accustomed to it. We were still outside and he knew we were there so he was ok with it. I don't think he would like being tethered and then left alone. He really needs to know that someone is close by. If Mike leaves, Ray will sit by whatever door Mike went out and he will stay there until Mike returns (so far it's been no more than an hour or so). Unfortunately, Ray seems to fear our middle child. For about the first two weeks there was no issue and they actually seemed to start bonding. But I have witnessed a few occasions, where Ray unexpectedly lunged and nipped my son. In each case, there was no sudden movement, no yelling, no loud noises, nothing to startle Ray, nothing to cause fear. We don't know why Ray acted this way. We introduced Ray to the kids’ friends and at first everything went well. But there have been a few instances where Ray has lunged and bitten people. We examined each scenario to determine what may have scared Ray and how we could change our behavior to make Ray feel safe. Talking to Ray and giving him plenty of space to approach you at his pace really helps. He doesn't seems to like too many people in his immediate surrounding. For instance, my daughter and her friend came into the house from the garage. This entryway into the house is a small space and Ray had just been laying by the door. Even though he had been introduced to the friend previously, this entry somehow scared Ray enough that he nipped the friend on the arm.

What Ray’s past adopters say: Ray is a resilient and loyal companion with a puppy-like spirit. He is a balanced work-from-home partner who will patiently let you focus on work, while also reminding you to get up and be active a couple of times a day. Ray has even built up an impressive resume of tricks in such a short time including stop, stay, come, leave it, take, and even belly rub! His secret to learning so quickly is a stable routine with a healthy dose of exercise, regular mental stimulation, and plenty of treats and pets for reinforcements. While he initially demonstrated some resource guarding behavior with us (likely related to being a blind stray earlier in life), this improved immensely through hand feeding and a consistent breakfast/dinner schedule. Some of his favorite past times include receiving belly rubs, exploring the smells and sounds of the outdoors, and breaking down cardboard. That’s right - although he’s not very fond of many toys, he is very committed to recycling. He’s also quite the amateur hiker now, with his longest trail being nearly 5 miles. He would love to keep this up and rack up even more miles. He would like to remind you that you’ll be his eyes, so please be extra aware of your surroundings to steer him away from things like poles and pokey branches. While he relies on his strong sense of smell, sound, and touch, he can be easily startled by dogs and humans who don’t live with him. Because Ray can react in defense without much warning in these situations, he may be best suited for a home with adults only and infrequent visitors.

What Ray’s Rescue Rep says: Ray gets along great with people and other dogs that he is familiar and comfortable with. Surprising a blind dog is never a good idea. He requires careful introductions with new people and new dogs. Use of a basket muzzle is critical to keeping new people safe when he is not familiar and comfortable with them. Would probably do great with another calm/adult dog in the home. Not for a family with children. A blind dog relies considerably on his/her sense of smell, hearing and, obviously, touch. Caring for a blind dog requires a unique approach:

Tips for living with a blind dog

How to help a blind dog

Medical: Besides being blind, Ray is in superb health. Current on vaccinations, heartworm negative, microchipped, and neutered.