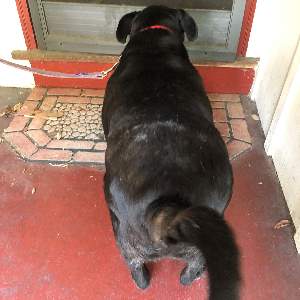 Background: Rico came to us from the Fresno area surrendered by the only family he's known since he was reportedly adopted from their local shelter when he was a puppy. Another rescue found out that Rico had been left outside on the back patio (in Fresno where temps at the time were at 100 and above) after the owner's family told him Rico could give him COVID-19. Lab Rescue was not able to obtain any records from the family and getting him into our program took a village of rescuers/transporters. The family wasn't allowing anyone on their property and had a family member drive out to meet the first rescue contact with Rico in tow. From there, Rico was able to spend a couple of nights at a rescuer's home in Fresno where she gave him a much-needed bath before he made the trip to the Bay Area.

What Rico’s Rescue Rep says: We are thrilled with the opportunity to find this sweet older guy a new forever home. He is reportedly 7 years-old, but the vet thinks he may be more like 8-10 years-old. It's hard to tell as Rico is significantly overweight and doesn't look like he was very well taken care of. Once Rico loses some weight, look out, you may say Rico's not a Lab; he's a Dachsund.

Rico went to a temporary foster for a few days before making it to his current foster home. When he first arrived, all he wanted to do was be in the house. He hung out with the foster and me for a bit in the backyard, but was more comfortable laying inside (likely afraid of being stuck outside again). Rides great in the car. Not so interested in other dogs. He might be okay with a nice cat. He met a cat with his tail wagging, but when she hissed at him, he didn't like that and barked at her. He is friendly and good with people and children. Because he's older, we wouldn't want children climbing on and pulling at him.

What Rico’s Foster says: Rico is an easy going boy. He is always happy to see me. He is good on a leash, even though our walks are short until he loses more weight as now he waddles instead of walks. He loves tummy rubs and will let you pet him all over. He sleeps through the night in his crate and the door is kept open. He likes to be in the room that I am in, but will also go lay in his beds in the other rooms. Currently, he spends most of his time sleeping as it appears that he was not getting much exercise previously.

Rico is quiet in the house. He does bark when he sees new people, but that is just his way of saying hi. We even met the mailman and he was more interested in seeing what was in the bushes nearby.

Medical: Rico visited the vet and had a full senior blood screen. His glucose levels may be low which will be re-looked at when he returns for a 3-week recheck in August. Rico is UTD on Rabies, DA2PP, and Leptospirosis vaccines, and is heartworm negative.

Rico is on a weight management kibble and a joint supplement. He is carrying a lot of extra weight and it's likely hard on his joints. Getting him in the pool and swimming would be an extra bonus. He could stand to lose 25 pounds. The vet thinks his ideal weight should be around 50 pounds.

Rico is located in San Jose.