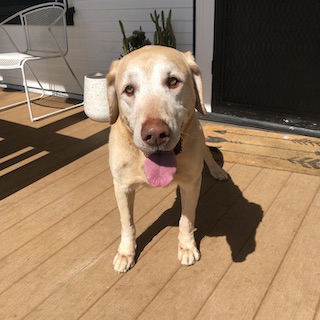 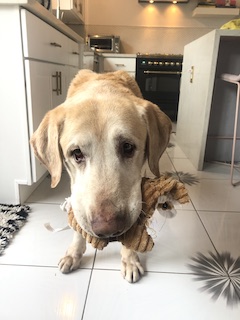 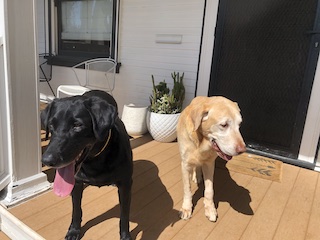 Can you be that home that will spoil Rocky in his senior years?

Background: Rocky came in as an owner surrender as his family decided they didn’t have time for him with two small children to take care of.

They adopted Rocky from a family friend who was moving when Rocky was 5.

Upon meeting Rocky, although strong and full of gusto on his walk (pulling in excitement), Lab Rescue noticed he was a little unsteady on his back legs and had a slight cough. Upon speaking with his former owner, we suspected Rocky might have some incontinence issues as his owner reported his crate was sometimes wet and we noticed Rocky piddled a small amount on one of the trips to the vet.

Lab Rescue took him to see a neurologist who suspected he might have laryngeal paralysis- a common condition of middle to older aged dogs that involves loss of normal function of the larynx. She recommended putting him on Dasuquin (nutritional joint supplement) and anti-inflammatories to keep him comfortable.

Lab Rescue sent Rocky for neutering, and the vet found and removed a mass from his throat which was found to be a low-grade sarcoma. It was also confirmed that Rocky does have laryngeal paralysis.

Don't tell Rocky all of this, as he has no clue and is simply relishing in the care he's receiving from his foster parents.

Rocky's foster parents have taken him in with loving and open arms. Rocky was an outside dog but quickly acclimated to being an inside dog at his foster home. He enjoys the company of their other dogs and sleeps on a dog bed in his foster parents' bedroom.

Rocky is incontinent and wears a washable diaper when he's in the house. He is used to wearing it now, but when he first arrived at his foster home, he gave his mom a laugh every time she went to put it on as Rocky thought it was a toy and wanted to play!

He is an amazingly sweet dog and gets along with all three of our dogs - a one-year-old puppy, 11 year-old Lab and a 10- year-old Chihuahua.

He is so easy to care for and love and if you don’t mind changing or washing his diapers, there are no other major issues. Although he is a bit weak in his back two legs it seems to have slightly improved since we first started to foster him almost two weeks ago.

He still pulls on a leash, but I am not sure he has had a lot of walking time, so we are still working on that. He seems to be very happy now and I would like to keep it that way!!. He enjoys getting baths and absolutely loves getting dried with a towel. He is truly an amazing boy and someone with patience and a lot of love to offer would be perfect for Rocky (Balboa the Rock Star—is the name we give him here:) Also if you are at a computer, he likes to be around you or at least sit next to you.

What Rocky's Rescue Rep Says:: Rocky needs a home where he can play, romp and relax in the yard, a home where he will be a welcomed member of the family. He's playful and likes other dogs, but has been reported by his former owner that he will chase cats. Rocky is neutered, UTD on vaccinations, and is on an anti-inflammatory and supplements, including mushrooms to boost his immunity!

Rocky is located in: Vallejo