Share This Lab:
Video: just arriving at the park 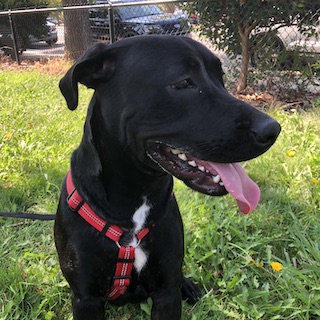 Background: Brought to our attention by a Good Sam who saw Shadow tethered on the neighbor's patio, she took it upon herself to ask the owners if she could take Shadow out for walks whenever she could. She encouraged the owners to surrender him as he was receiving little attention outside of regular feedings and the walks she took him on.

Shadow is a young, intact, and very exuberant dog. He can be overpowering in play-- jumping up, as well as nipping at your feet. A big, overly excited dog that doesn't know how to calm himself and gets ramped up very easily.

When Lab Rescue met him, we met him at a busy park with lots of activity: picnics, people playing basketball, dogs going in and out of the dog park... There was a lot going on, and all of it seemed so new to him, which we think it was, as he wasn't exposed to anything outside of his patio until his neighbor started taking him out. When Lab Rescue acquired him, he was placed with one of our more experienced fosters and her male dog, Charlie. She had to keep them separated as Shadow's immediate response was to rudely sniff at Charlie's private parts and continually attempt to mount him. Shadow didn't respond to "no" at all and had to be pulled away. With nowhere else to go at that immediate time, this foster thankfully stuck it out and made it work by keeping them separated until his next foster (who does not have a resident dog) was available in the next 5 days. Towards the end of Shadow's stay, the foster was actually able to walk Charlie and Shadow together without Shadow constantly trying to mount Charlie.

What Shadows Foster Says: Shadow has been doing great. He wants to please. He sits and waits before eating as well as entering and exiting doorways. He also takes treats gently. He learns routines quickly and loves tummy rubs.

At times, he can be high energy but is learning to calm down. He is a smart boy. When told to go get his "tiger", a stuffed striped tiger toy. He went out of the room and after looking through the house, came back 10 seconds later with the tiger. I was amazed as he had only been playing (more chewing) with it for 3 days.

He sleeps quietly through the entire night in his crate. Does well on his 2 walks per day. Likes other people and dogs. He is very interested in playing with them. So he has a tendency to jump up to meet the people. If they have a dog, he sniffs and then wants to play. He has had a playdate with another dog, but the other dog did not want to play. This was fine as Shadow enjoyed investigating the new backyard. They had a pool but he was not interested in jumping in.

What Shadow's Rescue Rep says: A strong and exuberant young dog. Shadow will require a large-dog experienced family who is willing to work with and train him. He can be mouthy and jumpy; his first foster shook a metal can of pennies to divert him. Ideal for a young active couple or individual. Families with young kids need not apply. Walks well with a prong collar.

Medical: Current on vax, microchipped, and heartworm negative. Shadow is due to be neutered at the end of October.

Shadow is located in: San Jose.