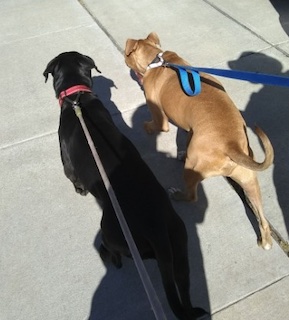 Background: Subsequent to bringing Shadow into our program, we received paperwork through the neighbor who was in contact with the surrendering family which showed that Shadow is a Lab/Pitbull mix.

Shadow was adopted in December of 2020 but became too much for the family to handle and has been returned. Shadow is a lot of dog, plus he suffered a sprain to his toe, which put him on nearly 3+ months of crate rest after he reinjured the same toe once it had healed from the first injury. Shadow's toe is healing well; he's fully weight-bearing on it, walking and running with ease. As much as he would love to, he should not be jumping; that's how he fractured his toe the first time while playing frisbee and a second time jumping up in excitement.

Brought to our attention by a Good Sam in the fall of 2020 who saw Shadow tethered on the neighbor's patio, she took it upon herself to ask the owners if she could take Shadow out for walks whenever she could. She encouraged the owners to surrender him as he was receiving little attention outside of regular feedings and the walks she took him on.

Shadow is now about 1.5 years-old and is trying to find a place he can call home. He is a young, energetic, playful, and strong dog that needs help with greeting people and all dogs without being too pushy, leash manners, and with some recent dog aggression that began just before his first injury in February.

What Shadow’s foster says: Shadow is a great boy. He is 16 months old (fixed 6 months ago) so he has lots of energy and will need activities to spend that energy. But once he is tired out, he rests quietly.

I have figured out not to play with him inside the house. Just pets. So when he is in my home, he has to be calm. He does have his favorite squeaky toys that he usually plays with when I am on the phone. He alert barks which he will do a couple of times until I get up to attend to the person or noise. He does not go on and on with the barking. But he does have a furious bark which I like. No stranger is entering my home. He does not have a mean bone in his body, but has 320 bones that are easily excitable. So inside the calm area, the outside is where he has other toys which he runs around in the backyard with. He also gets excited about squirrels and if he hears people on the side by the street (my house is on a corner lot.) Even with the next-door neighbor's two small dogs barking all the time, Shadow just ignores them. If he does get riled up outside, I immediately bring him inside. I do not let him get too crazy as then it is hard to bring him back to earth.

I am working on making Shadow control his urges to run full speed at people and then jump. He does not jump on, or mouth me as he knows better. At night he sleeps in an open door crate. Each morning, he is allowed to come out when I say "ok." I sometimes leave the bedroom and walk all the way to the kitchen before saying "ok" and he waits. I know he really wants out, but I m trying to show him that he will live if he waits. I keep extending the time I make him wait. In the home, Shadow will ask to be petted which he is getting more and more fond of.

From the age 4 to 7months, Shadow was left outside at a mobile home park where all he did was bark at people and animals while being tied down. He was acting like a puppy by jumping and mouthing people. The owners would not interact with him. He missed out on lots of pets, treats, and training during this critical time of his life.

Shadow, even though he likes his chew toys (and chewing rocks) he has not chewed on anything in the house or backyard. I have left him alone loose in the house for up to an hour. If longer, he has been crated. He has had no accidents, is great with routines. He sleeps quietly through the entire night for 8 to 10 hours. He is a healthy boy and appears to be able to eat anything (including rocks.) He loves to chase balls and can catch a frisbee (once his toe is fully healed).

He does want to pull on walks, but we are using a K9 Bridle which is working well. He is easily excited when he sees another dog. He attempts to charge toward them as he wants very much to play. He has not been able to interact with other dogs because of vet restrictions while his toe is healing, but we recently met up with my neighbor's dog, Leo. Shadow was overly excited to see Leo and could not calm down until they had met. Then we walked calmly for a mile together as if they had known each other for years.

Shadow does have some stubbornness. He knows that I am the Alpha, but he will at times, when I I make him sit and wait, he will look away from me as if something else is more important than me. I know he is testing me, so I just wait for him to look at me. We are also working on hand signals. He is a wonderful dog and needs a consistent and firm owner(s).

What Shadow’s Rescue Rep says: Shadow is a handsome boy and definitely not for the faint of heart. He needs an Alpha in his life! After the initial excitement of meeting new people, Shadow does have the ability to hang out with people but needs to learn to curb his over-exuberance and coming on too strong. He is undersocialized with dogs and becomes quite anxious, excited, barky, and growly when dogs are in sight. Shadow will require lots of walks, strong leadership, and will benefit from daily vigorous exercise. A good dog is a tired dog! These words certainly apply to Shadow. He responds so much better after playing several rounds of fetch. He'd probably make an excellent running partner, too! Ideal for an active couple or individual that can provide firm and consistent direction. Families with young kids need not apply.

Shadow will be going to a board and train for one week in July and prior to that, we are looking to get him some help with his leash aggression and dog socialization. The trainer will meet with Shadow's adopters after he's completed his board and train to pass on the skills/techniques she used with him.