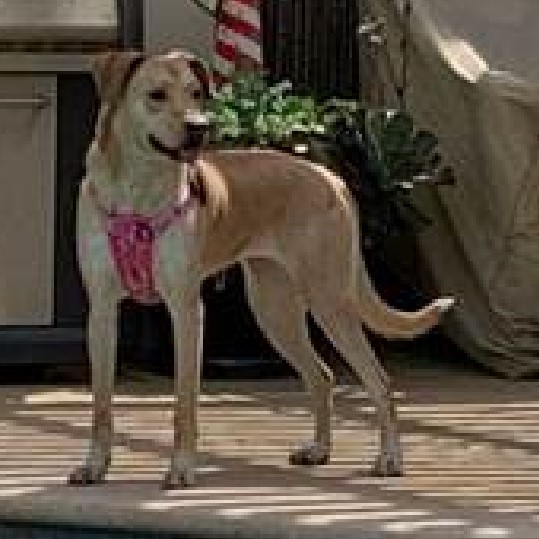 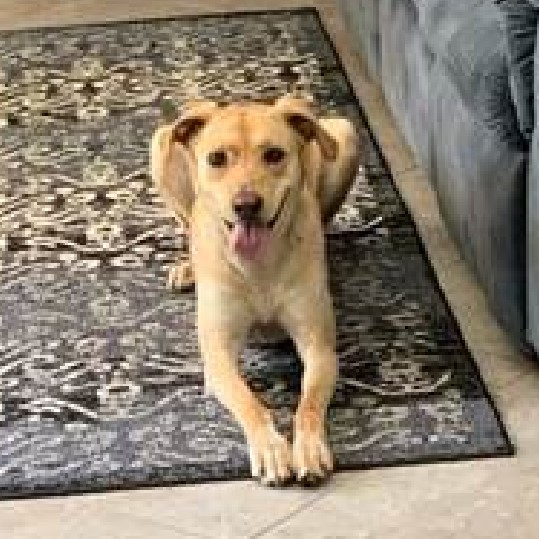 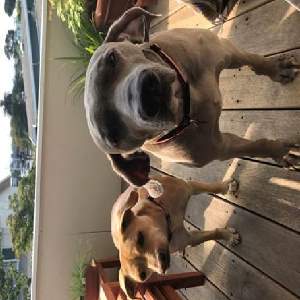 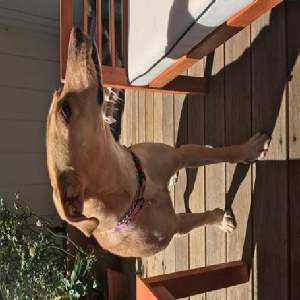 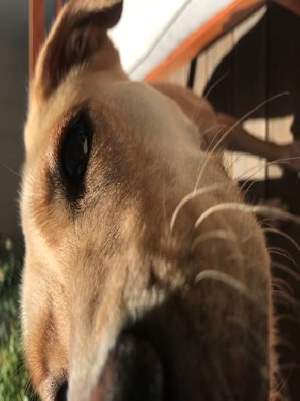 Background: Sophia reached Lab Rescue through the connections of social media where one of our reps was tagged to help her. The rep responded and here's Sophia's story: She came from another rescue in Modesto. She was found two years ago, pregnant and wandering the streets. She was (and still is) very skittish but they were able to catch her, bring her into their rescue where she could give birth to her puppies off the streets. All of her puppies were adopted while Sophia remained in a kennel while they searched for a foster. She did well with her first foster family until she got a hold of their guinea pig. They had a dog that Sophia played well with. Sophia went to her second foster home where she lived for three months. This couple wanted to adopt her but discovered Sophia did not travel well and they are regular RV travelers, on the road for extended periods and long distances. She didn't eat or drink for three days after their first trip with her and in preparation for their next month-long trip at the end of August, they knew they had to find her another home. The rescue in Modesto didn't have any available fosters, and Sophia was transferred to a Lab Rescue foster in late August.

What Sophia’s Foster says: What a sweet little girl! We have had Sophia for a few weeks and huge deep brown eyes have drawn us in. While she is still timid, she is increasingly interested in and curious about us and wants to spend her days and evenings near us. She follows us around the house wherever we go, and spends most of her day lying on her bed or on a blanket on the couch in my home office, happily sleeping and dreaming, though often with a wary eye to anyone who may try to approach her. Her favorite place to sleep is at the foot of our bed, out of reach but still close to us. She sleeps well through the night there, or if we tell her to get “on your bed” (it isn’t clear if she understands this command or if she observes the other dogs doing the same and follows suit.) She seems to enjoy the companionship of our two dogs (males 3 and 13), though she won’t play with the younger dog, despite his eager and energetic attempts. Sophia is a timid and slow eater, often taking a mouthful of food away from her bowl in the kitchen to somewhere she can chew while observing us. We have found it is best if we feed her after our other dogs (we will take the dogs into a neighboring room) to give her space, privacy, and time to eat. She goes on walks twice a day (morning and evening — she is perfect on leash) and we let the dogs out every few hours in the fenced backyard to explore and relieve themselves. She has never shown any interest in the gap under the fence gate, or in any other means of escape, but we have not left her unattended for any length of time out of the house. While she is mostly housebroken, we have had a number of accidents in the house. These accidents have been largely avoided by ensuring she goes out regularly (and that when she is outside she relieves herself), and praising her with treats for doing so. The handful of times we have left her at home alone in a large plastic crate in our bedroom she has managed to break out. We have successfully left her in a very large wire crate in the garage for a couple of hours (for a larger dog we had already secured the edges with extra zip-ties), though she has chewed at the plastic presumably in an attempt to escape. We work with her every day to get her more comfortable with us: hand-feeding the first portion of her meals to establish trust; sitting on the ground next to her bed scratching her head and ears (she will pull away but allow herself to be pet); encouraging her to play with the other dogs, and to explore her surroundings. Every day we see her warming up to us little by little, and with a loving and patient home we are confident she will learn to be an affectionate and trusting little girl.

What Sophia's Rescue Rep says: Sophia will need a very special adopter who can continue her rehabilitation and affiliation with humans. She has a sweet disposition but is still unsure of people. Once she is leashed, you can pet and walk her, which by the way, she enjoys her walks and is not leash aggressive. She will tuck her tail around other dogs. Sophia was most comfortable in the backyard of the foster home in Modesto. Although they had a swimming pool, they didn't reach the point of introducing water to her but discovered she was fearful of water from the hose when they were watering plants. Her adopter(s) will have to be incredibly patient with her, hand feed her for a while, allow her space, and for her to come to them. The presence of another calm/confident dog in her forever home will be hugely important. Probably not good for a home with small children that may frighten her and hinder her rehab. No cats, chickens, or other small pets.

Medical: Current on vaccinations, microchipped, and spayed. She has an appointment in October to have her vaccines updated and to receive a heartworm test.