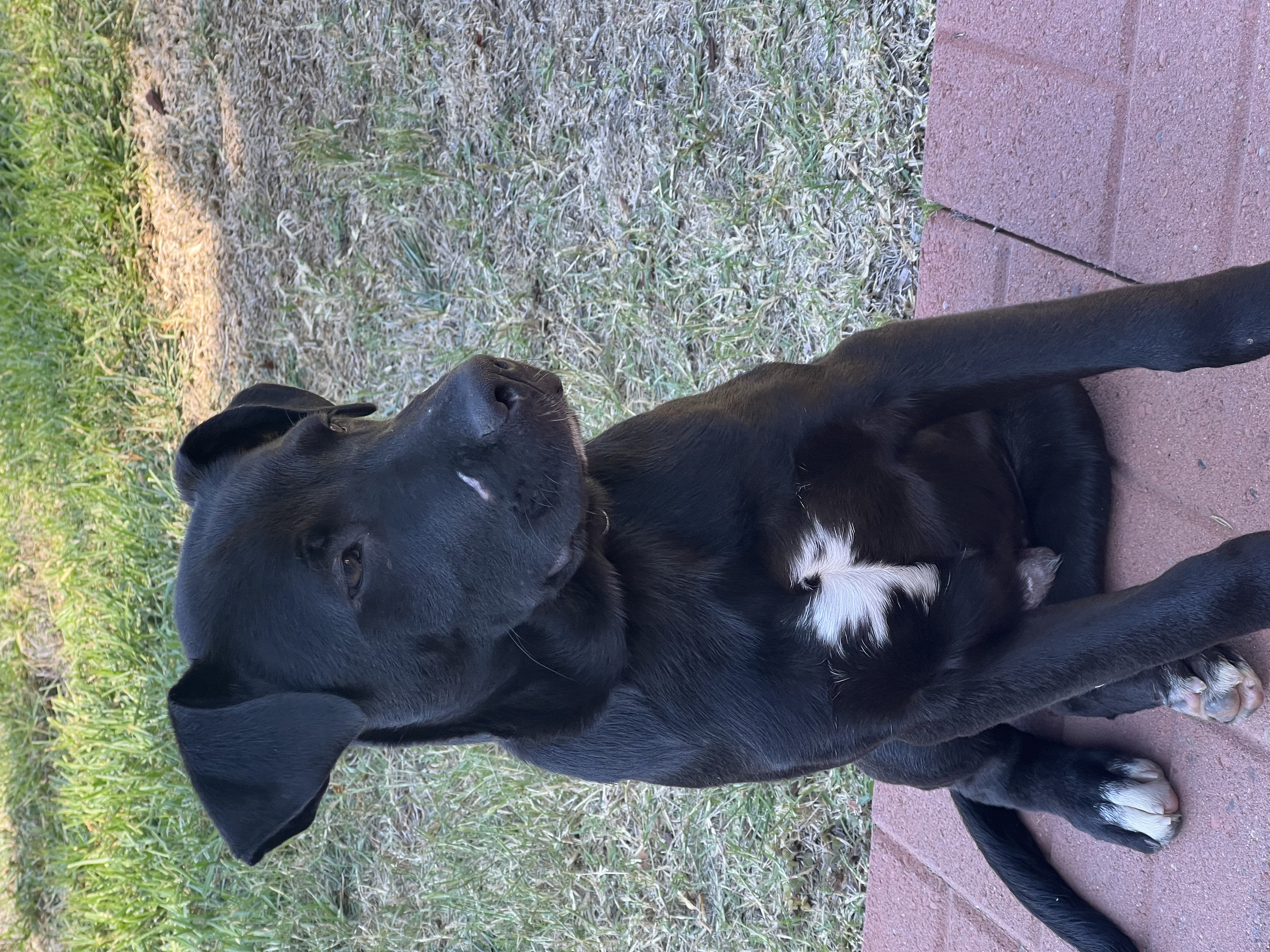 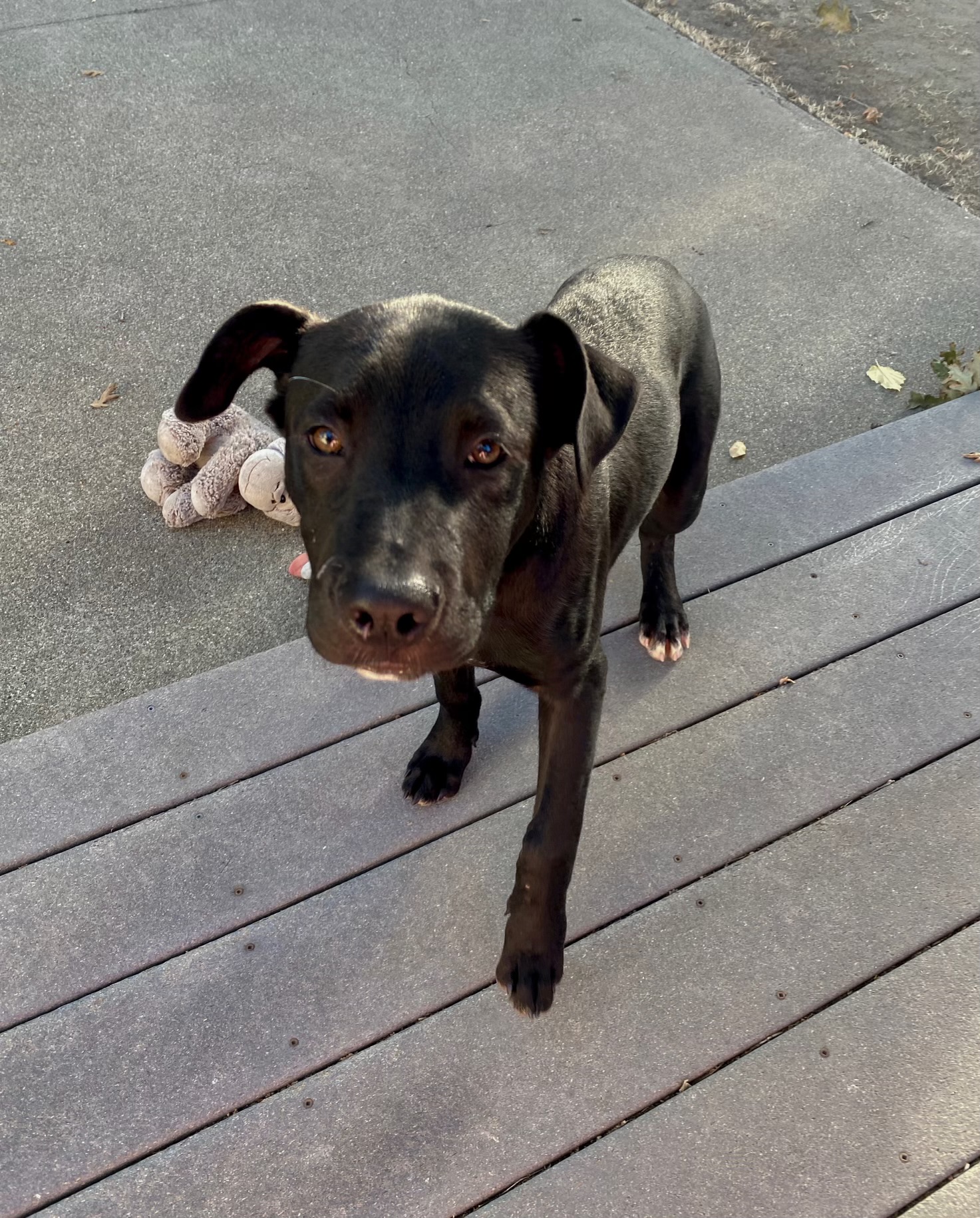 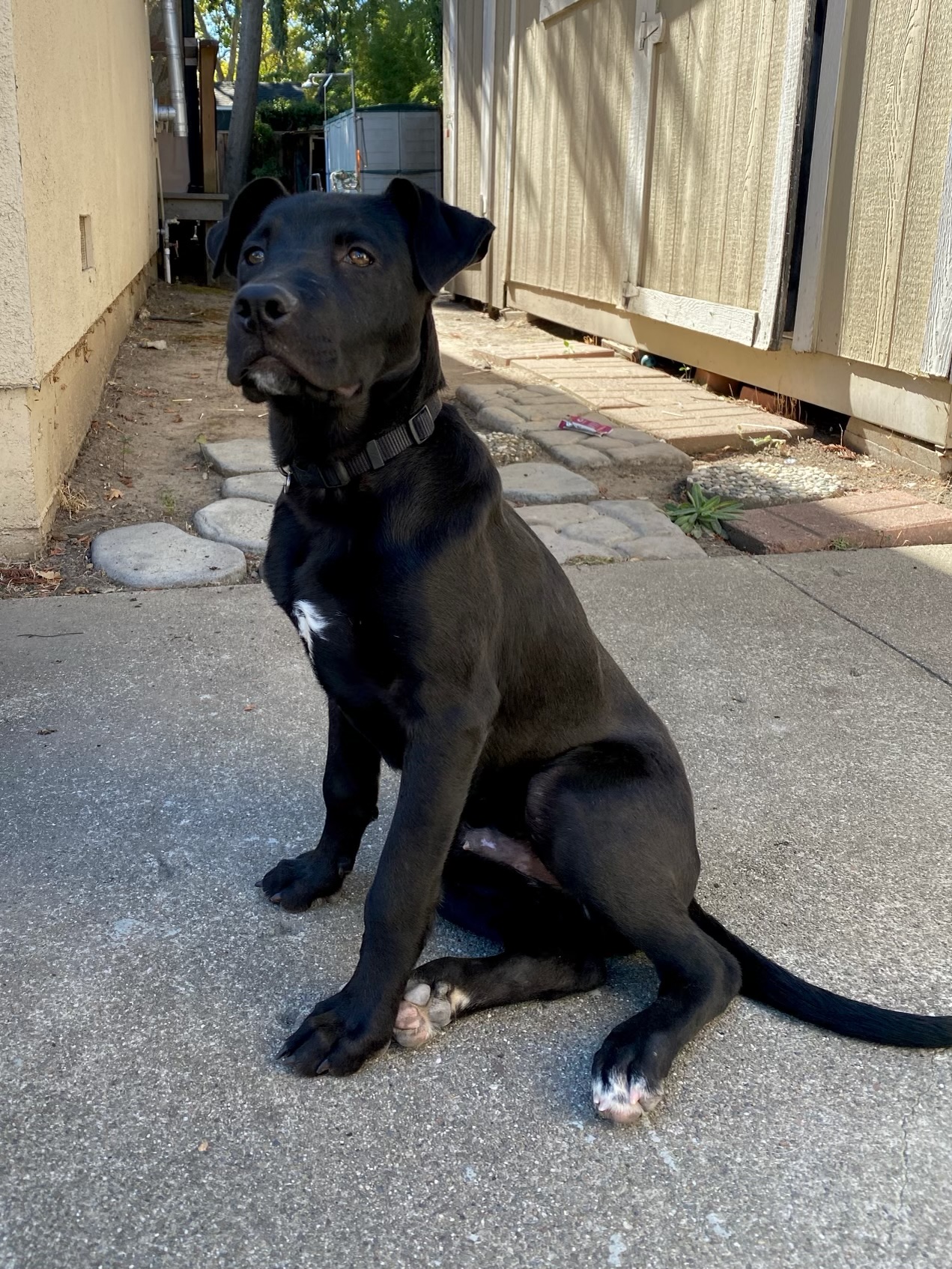 
Background:Buddy and five of his littermates were found as strays in a field in Madera County; the shelter asked if we could bring them into our program as they were severely overcrowded. The pups were in the shelter for approximately a month, then made their way to Lab Rescue and without any available fosters at the time, we had to board them while searching for fosters and, or adopters. After a month in boarding, a few fosters came through and we were able to get them to the Bay Area. All of the pups, except little Buddy, have been adopted.

Once in the Bay Area, Buddy spent two nights at a temporary foster home until his longer-term foster was available to pick him up. Here's what she said:

Independent yet cautious - he is independent in that he entertains himself with toys and doesn’t always need to be right next to you or another dog. He is cautious as he isn’t used to the sights and sounds of a neighborhood or home as he has been startled and shied away from noises such as lawn equipment next door, the dishwasher, and espresso maker. He’s not used to being inside a house so the first day here he was hesitant to even come in the house. Also when people came over to visit he would cautiously approach them. I let him take the lead on going up to people or experiencing new things in the house. My neighbors visited Saturday afternoon with their young boys and their Golden Doodle. After an initial romp with the visiting dog, Buddy was more interested in getting pets from the boys rather than playing with the dogs (mine and my neighbor's) He has barked a few times - when a neighbor‘s dog barked, at some birds on the fence, and once I don’t know what he was barking at.

He has been sleeping through the night in a crate; I put him right outside and he has peed and pooped right away, and then he goes back into the crate for an hour or so.

During the day he likes to be out in the backyard on the lawn and that’s OK as long as I’m with him or can keep an eye on him as he does want to eat bark. For that he is learning the Drop it command and I give him a toy instead of the bark. He also likes to eat plants - yep, he’s a puppy! He’s also quite the fetcher so that’s good fun for him.

If I can’t keep an eye on him, the first day I put him in the crate for a short period of time and then gradually I’ve been able to leave him confined to the kitchen area - with nothing he can get into.

When he is inside during the day, I make sure he goes outside every hour or after waking up from taking a nap to go to the bathroom. I’m happy to say his crate has been clean every morning and he has had no accidents in the house.

What Buddy's Foster Says: Buddy has been in my home for a little over a week now. He’s been sleeping in his crate all night not a problem. Since my other rescue lab eats at 8am I take him out of his crate at the same time. Eat in a different spot than my lab because he eats super fast and try to go after my other dogs plate. I have a third dog in my house (Maltese poodle) and he seems ok with the other dogs around.

He likes to fetch, he was eating my plants, chew my tv remote (wasn’t cautious enough to put it away) no more chewing inside the house.

Still some accidents inside the house. He’s shy for sure. Very cautious. Likes to spend time at my labs bed. They share the bed sometimes during the day. He behaves when he goes in the daily walks around the block.

I think he would be fine in a house with other dogs, babies, people who have the time to take him on walks at least twice a day. He still needs to be house trained
He’s sweet, and beautiful.
I really hope you find a loving place for him. He deserves it.
Thanks for the opportunity of fostering him.
We already love him very much.

What Buddy's Rescue Rep Says: Out of all of the pups, Buddy seems to be the most independent. When he and his littermates arrived to the Bay Area, we all met in his temporary foster's backyard. Buddy romped around with his siblings some of the time, but most of the time, he was content chewing on a dog toy or on some tanbark by himself. All of the pups were a little skittish which is understandable as it was the first time they'd been in a home environment. Buddy is not for a first-time dog owner and will require a home where people are around most of the time and can provide him with the attention, guidance, and supervision that a puppy requires. Getting him signed up for a puppy class with his new family will be a requirement.

Medical: Buddy is current on DHPP, Rabies, and Bordetella. He will be microchipped and neutered in the near future.