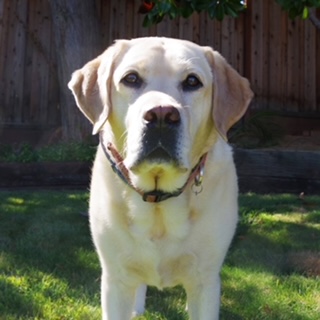 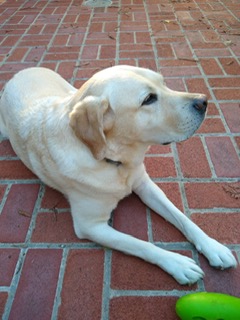 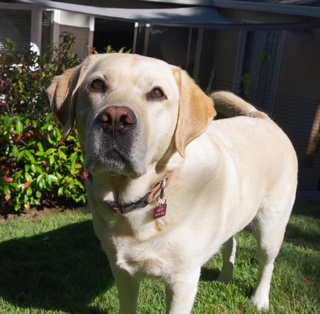 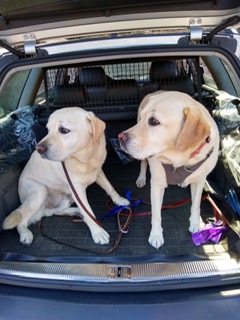 Background:Cody is a sweet boy who was purchased by his owner from a breeder at 8 weeks. He has been very well loved and cared for. His owner does a lot of traveling for work and feels it would be best to rehome him. His owner describes Cody as very friendly, sweet, playful and gentle.

What Cody's Foster Says:Cody is a love bug. His tail never stops wagging when he meets you. He loves meeting people when we go out on walks , down to the store or to the library. Cody is calm at home. I am able to easily work from home while he is in the same room. He’s quiet and mellow. He’s even very calm when I go to put his harness on for a walk. Every so often he picks up a toy and we run around the house playing “keep away”. But for the most part, he’s just calm inside.

Cody is a good car dog (only short trips so far). He just sits in the back of my station wagon quietly while we go places. He does not try to get around the dog net, he does not howl, he is not agitated. He just watches the world go by as we drive along.

I have taken Cody and my own dog to Starbucks together. Cody was fine waiting with me outside and laid down the majority of the time I asked him to. And he was fine waiting (while secured outside) as I went inside to pick up my drink. Cody and my own Lab certainly got a lot of attention from the other customers and they had a good time on this outing.

He and my dog co-exist very well together but they don’t really play together. I think this is because my senior dog is just not interested. Perhaps it’s also because Cody is still feeling like the new dog; and that he is unsure of his place in our household. When I pet the two dogs, they both get jealous of getting attention from me. If Cody were to be the second dog in a family, I do not foresee any food guarding or toy jealousy issues. He is super gentle in the house.

Cody is leash reactive though out of exuberance, not fear. We have been working with him and his leash reactivity has decreased. He has learned that we don’t like it. And we have learned to prevent it sometimes by soothing him if we notice the approaching dog before he does. It is better but still there and may require bringing in a professional trainer.

When we go on walks, Cody pulls some. And he pulls a lot when he sees a squirrel or a bird. Cody has a prey drive. He will chase squirrels in your yard, he will try to chase the cat across the street, he will bark if he hears an animal in the yard. If a neighbor is out jogging with their little dog, he will consider that dog prey and will use his entire force to go after the dog. I think it’s all about the chase for him. I was pleasantly surprised though that he didn’t bark on garbage day nor when there was a siren in the neighborhood.

Cody has only ever chewed on dog toys, never on furniture. He is a very strong chewer and has pulled apart some dog toys that have lasted through many other Labs. He enjoys chewing on a good Nylabone while he’s relaxing during the day.

I am re-introducing him to being in a crate. We are building up time and it’s going well. During the day there is no need to crate him as I trust him in the house when I leave (except do not leave trash cans at dog level, he will get into them). During the night, he prefers the dog sofa, spoiled sweet dog! Theoretically it’s always good for a dog to be crate trained. And Cody was crate-trained early in life. But at this point in his life, he is so chill that I don’t believe he’ll need to be in a crate very often.

Cody will make a family very happy. He is a true gem and this is the closest we have ever come to “foster failing” after 13 foster dogs. He needs a strong owner and no cats in the home(nor chickens, rabbits, etc).

What Cody's Rescue Rep Says: What a happy boy!! Whether he see dogs that he wants to play with or humans giving him a pet, that tail is always a waggin’! He is good with most dogs wanting to play and good with people. The minute he met the Foster’s Lab he was ready to be friends! He does not dig in the yard or chew non-dog items in the home and is not much of a barker. Cody is treat motivated and has a soft mouth. He loves to run around and explore in the yard so we would like him to have a backyard. He is good riding in the car, loves to swim and play fetch. He has never been in a pool but he has swam in oceans, rivers and lakes. Cody was raised with kids. Because he’s strong and with his size, any kids in the home should be 6 and up if dog savvy. Cody will require an adopter who is physically strong both in physical strength and leadership.

Another well-trained similar in age and weight Lab in the home who likes to play would be good.

Medical: Cody is up to date on vaccs, Heartworm negative and chipped.