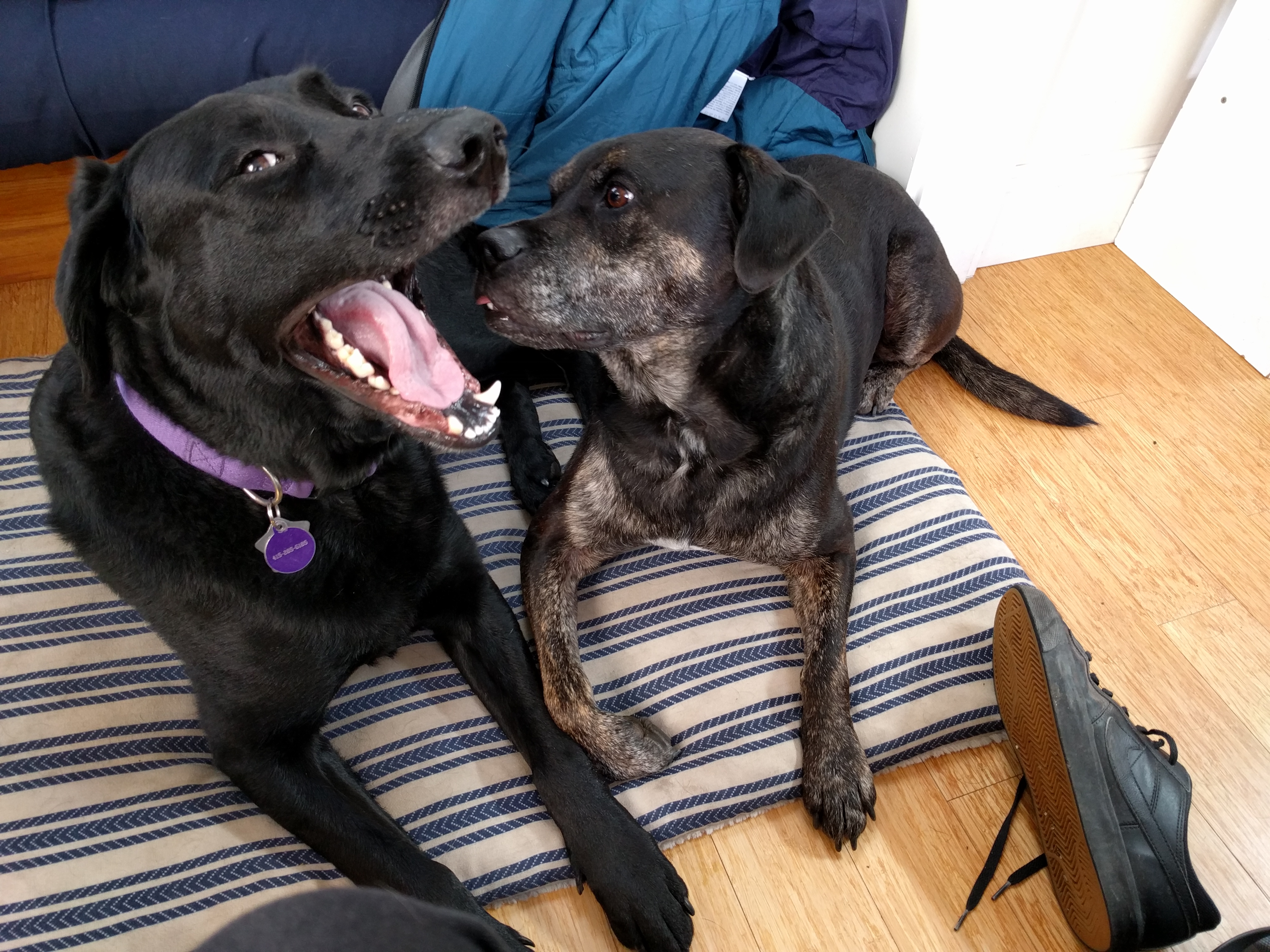 
Background: GGLRR adopted Hal out around 5 years ago and unfortunately the adopters are not able to keep Hal any longer. One of the owners passed away and the other owner is having some medial issues they need to focus on at this time. They have loved Hal and just want to find him a wonderful home.

What Hal's Owner Says: We fostered dogs for GGLRR and Hal was our last foster dog. We ended up wanting to keep him and Liz allowed us to adopt him. Hal was pulled from the Martinez shelter when found as a stray with no tags or microchip. After the two week hold when no one claimed him GGLRR grabbed him and we got him on a two hour notice. Hal appears to be a pure black lab with no mix and was deemed so by GGLRR when he was first put on the website. The best estimate of age is six or seven years. He is neutered, has no medical problems, is heart worm neg and is UTD on immunizations. He weighs 75 lbs. He is microchipped. He is treat motivated and knows about a dozen commands. He is very human focused and is a Velcro dog, following me around the house and lying on the floor near me. He is not allowed on furniture, does not counter surf or chew. He is not destructive at all. He has a soft mouth and is good with children. He has no resource guarding issues at all. He welcomes all humans although he has a brief low alarm bark if someone comes to the door. Otherwise he is not a barking dog at all. He sleeps through the night in his doggy bed. He is a summa cum kibble graduate of the SPCA Manners Courses. Hal gets along with other dogs he meets on the street or who come to visit. He has not been adequately socialized to dog play in dog parks where many dogs are off-leash and chasing each other. The playful chasing that dogs engage in seemingly can awaken his predator instinct. We have avoided those situations thus far and do not take him to dog parks. He would benefit from another dog in the house. He does not get along with cats. He has some separation anxiety when left alone at home. He is not destructive at all when left but will make a lone mournful howl about once every 30 minutes. We know this as we have recorded him many times when left alone. He is iron-clad house trained and has not had an “accident” since his first night with us. He pees on command (“Go Pee”) and poops on a rigidly fixed schedule. He will also indicate if he needs to go out. He has a ball fetish and loves to fetch and frequently finds balls on walks. His fetching has diminished somewhat with age and he will simply lay down with the ball after a several throws. He will pull on leash some when looking to poop but otherwise responds to the command “Hal Slow” to heal. Hal would be best for a family where someone is home most of the time. This is not a dog that can be left alone 8-10 hours a day while everyone is at work. He is mild mannered and fine with kids, I think even with a toddler. He would also be good with an older couple. He needs two walks a day. He was also a good trail dog on our treks in the Sierras but his trail training would need refreshing at this point.

What Hal's Rescue Rep Says: Hal is a wonderful dog and is very well trained: He knows sit, stay, down, come, leave it, take it and several other commands. He likes to ride in the car, likes to play fetch and gets out for a couple of walks per day. He loves to be with his people and would be fine with another dog but for sure no cats. His owner describes him as having a very mild temperament and is indifferent towards other dogs. He would be fine in a home with kids. GGLRR wants to find Hal a home that will give him the exercise her needs and work with him on some of his leash skills.

Medical: Hal is updated on his shots, heartworm negative. He is microchipped and neutered.