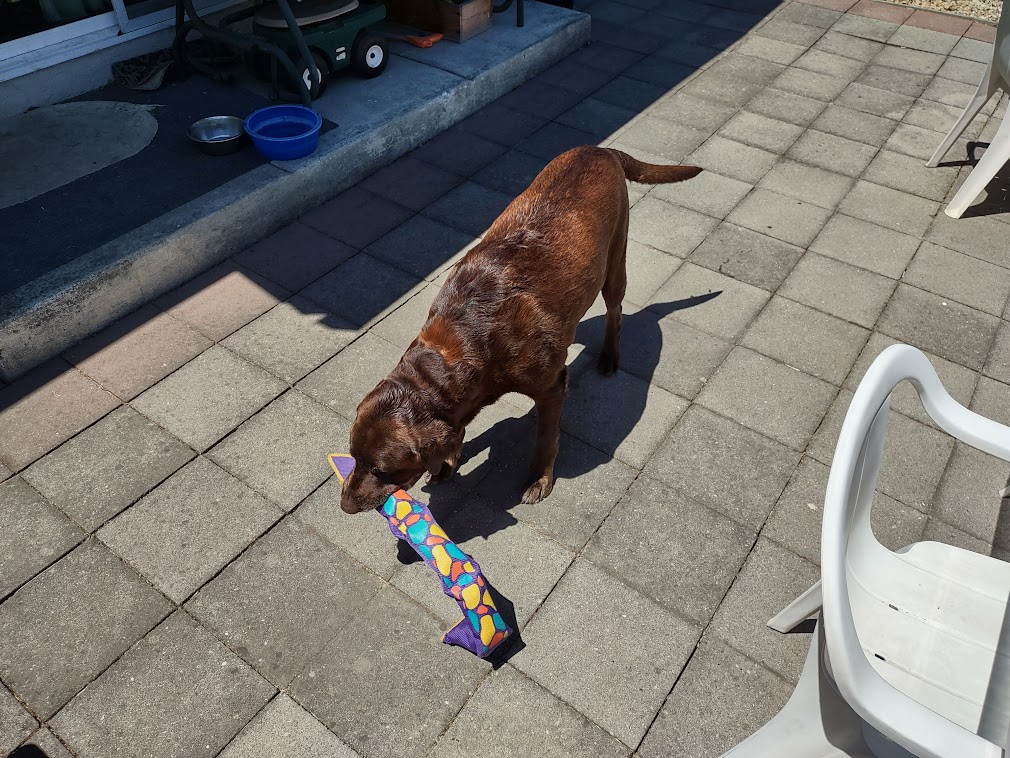 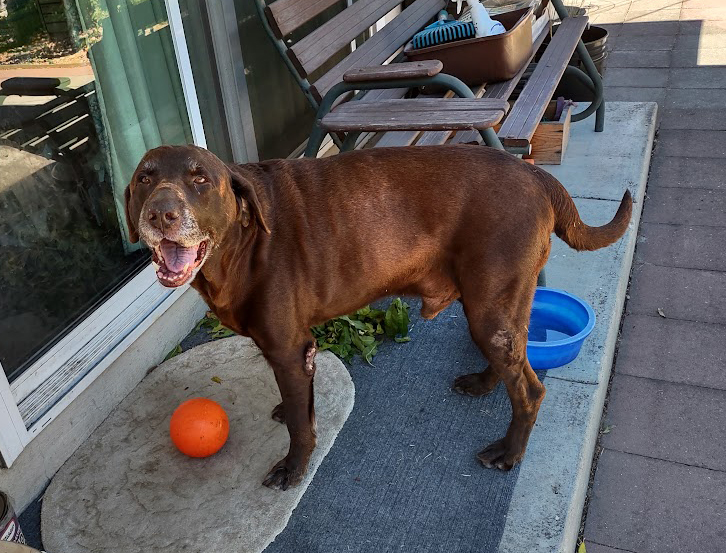 
Background:Hank has been with his family since he was a puppy. Due to their relocating out-of-state for work, they were unable to take him (and their other dogs) with them as they would be staying in a motel for a month, followed by an apartment for 6-months while they looked for a permanent home. There were a total of four dogs in the household: Hank (dad), his female counterpart (mom), and their two adult offspring, a male and female. The family found homes for the two females. Hank and his son (Chibs) were surrendered to Lab Rescue, and Chibs became a foster fail. The dogs were raised with children (6-18 years of age). His family describes Hank as happy, energetic, and loving.

What Their Foster Says:Hank is an easy going guy. He became my best friend in a matter of days. He enjoys walks and does not pull on the leash. I have had him only a week and there has been nothing on our walks that has excited him (not even fireworks.) We have walked within 4 feet of a squirrel and nothing. When meeting other dogs he sniffs a couple times and then wants to continue walking. He does not jump up on people. This boy loves to swim. We visited a friend’s pool and Hank went right to the pool. I showed him where the steps were and he did not have to be told twice. He was in swimming around for a couple minutes and swam back to the steps to get out. He walked in a couple more times and even once did a seal dive into the pool from the side. He was one happy boy.

He is a good listener. Is quiet most of the time, but when he talks, he is vocal. I have yet to figure out what he is telling me. He likes his pull toys. But do not throw it as you will be the one chasing it. He knows sit, stay, and back. We are working on come, but he is always near me as he wants to know what I am doing or where I am going. I have left him for up to 2 hours and he did really well. He has had no accidents inside. At night, I tell him to “go potty” and he goes to his favorite tree, pees, and comes back inside. He sleeps quietly through the night in his bed at the end of my bed and will not get up until I do. But this boy is sneaky. Once I turn off the lights, he gets out of his bed and lies on the floor next to my side of the bed. It might be that it is cooler on the floor than his large padded bed. He does not like to be left outside by himself. He wants in and will vocalize about you not letting him in. But recently, I left the backdoor open and told him to stay while I walked into the kitchen which was out of his sight. When I returned 10 seconds later, he was still outside. So this old guy can be taught things. He does listen. I am excited to learn what more he knows.

A Lab Rescue volunteer went out and met Hank. Here's what she said:Hank is a handsome, sweet, and mellow senior lab. Hank greeted me with a wag of his tale and his head to my hands for a sniff and pet on the head hello. Hank walked great on leash with minimal pulling. He was quick to correct his leash pulling when commanded. He was a bit stubborn and when we stopped in the shade he wanted to continue walking and sniffing where he wanted to. When I ignored him he again wanted to walk to where he wanted to go. With a tug and a firm "no" he accepted his fate. Hank let me touch him all over – hips, ears, paws and belly. When I looked in his ears they looked full of gunk and he is either in need of an ear cleaning or he has an infection. Hank also has a growth on his elbow that was dry, scabbed and bleeding a little. Hank wasn’t really interested in playing with the ball and was just happy to walk and sniff. Hank took my treats softly and was uninterested in the food I had in the bowl. I felt totally comfortable putting my hands in the bowl and near his mouth. Hank would do great in a home where he could go on a nice walk (1-2 miles tops) each day and be with a family who would like to have an easy-going, mellow old guy with some stubborn tendencies hang out with them during the day.

What Lab Rescue Says: We'd like to see Hank in a home where he can enjoy his senior years with lots of attention, playtime, and relaxation. He'd do best in a home where he wasn't left alone for long stretches of they day. His current foster says he's fine around cats, although at a short-term foster home, he did chase some feral cats; I suppose it would depend on the cat. He'd be fine with children, but those who would respect that he is a senior (so not to pull and tug at him). Hank enjoys car rides and sits/lays quietly in the back seat. As his foster mentioned, he is a swimmer! He can be stubborn and will need someone to be firm e.g. if he tries to push his way through the door, or isn't listening, clap your hands and firmly tell him what it is you want him to do.

Medical: Hank is up-to-date on vaccinations and has been heartworm tested. We had his ears and skin treated for an infection. Parts of Hank's body, including his elbows, are calloused from lying on hard surfaces and care should be provided to try and keep him on soft surfaces as well as keep the callouses moisturized.

If you are interested in adopting Hank, please email Rescue Rep Kris at krisellen.nm@gmail.com