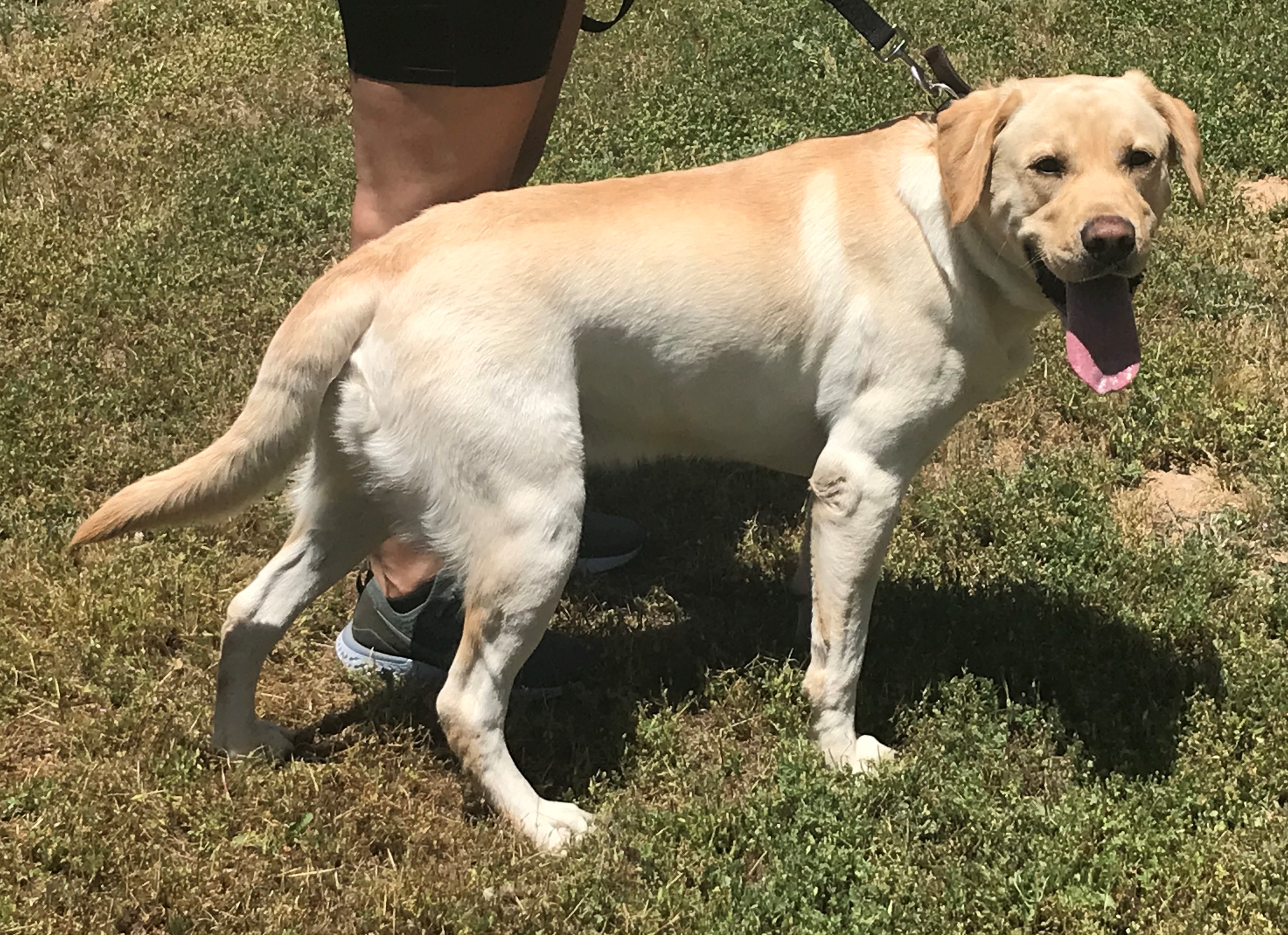 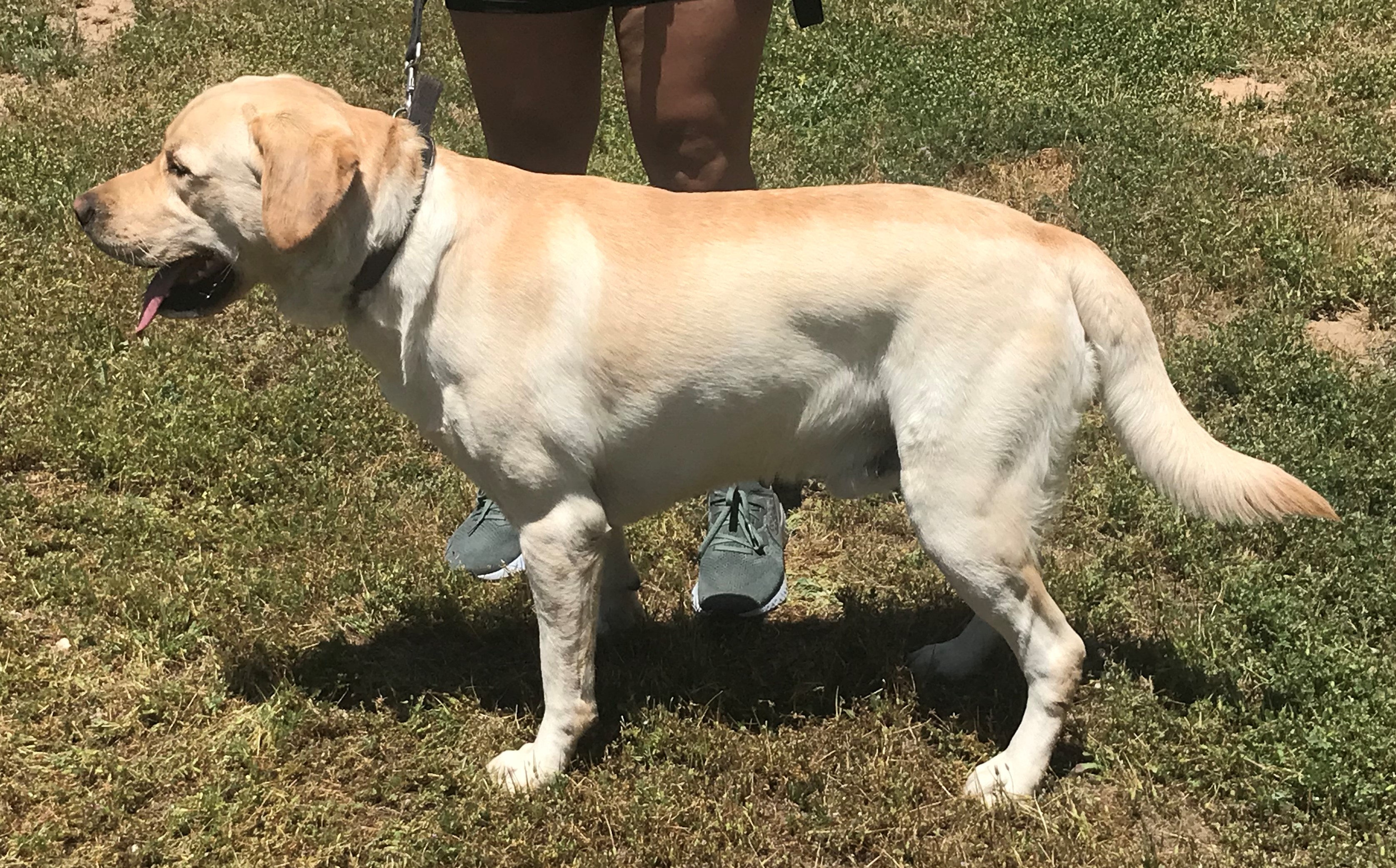 Background:Jax's mom contacted Lab Rescue as she was getting ready to move and the place she was going did not accept pets. Jax was purchased from a breeder at 8 weeks of age. His mom provided basic training, herself, including crate and potty-training, socialization with family/friends and their dogs. She taught him to sit, stay, down, circle, paw, leave it, here, and speak. He likes to play fetch, tug-o-war, and ride in the car. His mom reported that he sometimes digs in the ground, tends to bark or whine when left alone, and barks when excited. She described Jax as playful, mischievous (likes to get into things), energetic, sweet, and a people lover.

What Their Foster Says:Jax is doing much better. He isn’t trying to mark and is pretty good with Jazzy (our female Lab). He mostly just wants to play, but he sometimes plays a little too rough and thinks he can mount her, but he gets scolded and quits. She’s learning to fend for herself, mostly by just running, which is good for both of them.

He has calmed down a lot, and he sleeps in his crate at night and doesn’t make a peep until I let him out in the morning. We crated him during our last horse show (on the 5th) and he never complained. We’ve also left him home with Jazzy outside, and there was no whining or barking. He would just go to the backyard with her and was good. No digging or destruction of any kind.

He really is afraid of the cats, and although he does like to chase them if they run, he’s not too serious about it. And if they turn on him, he statues (new term for stop and stay – haha).

In addition to socks, he loves gloves, Kleenex, napkins, plastic of all kinds, including glasses, eye drop bottles, plastic bags, wrapping or packing material, and dogs toys. He has eaten quite a few things before we got them away from him. And we’re getting smarter by the moment, as far as, e.g: pushing back from the edge doesn’t always work. He is very large and surprisingly agile. So everything needs to be put in cupboards or way high up. He is a little spoiled in that when he steals something he shouldn’t have, he plays “keep away,” and won’t give it. He is, however, learning that is not a good idea.

I wouldn't recommend small children, as he’s young, big, and can be mouthy. I’d love to keep him but he needs someone younger who can really work with him and keep him out of trouble.

What Their Rescue Rep Says: Jax came to Lab Rescue from Sacramento. I met the owner to transport Jax to his foster. Jax hopped in the backseat but seemed confused when his mom said goodbye while he stayed in the car with me. We drove for close to an hour, and although Jax had a hard time settling; he sat or stood quietly while looking out the window. He did eventually lay down after about 30 minutes. Upon arriving at his foster home in Livermore, a ranch with lots of space to explore, Jax was busy sniffing and marking his territory. He was extremely interested in the foster's female Lab, constantly trying to mount her.

Jax has done well with the foster's dog-savvy cats. His family reported Jax is scared of aggressive cats and unaffected by others.

We'd like Jax to go into a home experienced with large dogs and with a family committed to continued obedience training, one where he won't be left alone for long stretches of the day. His owner and foster both reported that Jax gets into things and can be mischievous. A home with a large, secure yard would be nice. In his previous home, Jax was around older children (above 10) and did well. A home with small children is not recommended as Jax is big, can be mouthy, and may unintentionally knock over a small child. He's had a great start to life, in the company of his mom who paid attention to him, cared for, trained, and loved him.

Medical: Appears to be in great health. Neutered, current on vaccinations, heartworm tested (negative), and microchipped.